Last week the FBI conducted an unprecedented search of the residence/luxury golf golf resort of former reality TV game show host, and twice-impeached president of the United States, Donald Trump. What makes this unprecedented is the fact that no other American president has ever been the suspect in so many brazenly criminal activities. 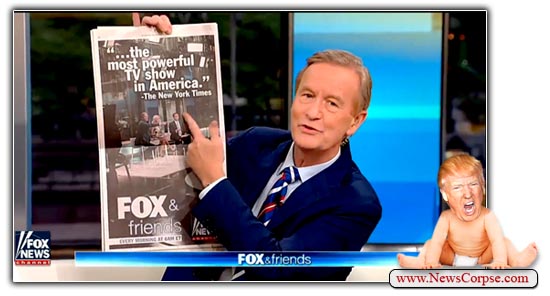 The FBI served a search warrant at Trump’s Mar-a-Lago bunker that sought to recover classified documents that Trump had unlawfully taken from the White House. The documents contained highly sensitive information that would cause great harm to American national security if they got out. After months of denying that he had any such documents, and failing to comply with subpoenas, the FBI took the unusual step of executing a search warrant.

The reaction from Trump’s defenders in politics and the press has been a hodge-podge of contrived excuses that range from the comically idiotic to the pathologically depraved. Among the array of attempted alibis floated by Trump and company were that the documents either didn’t exist, weren’t classified, or were planted by the FBI. And as such, the search was justification for unchecked fury by Trump’s supporters and apologists. That fury erupted into actual acts of violence against the FBI and threats of more to come.

Consequently, Fox News concluded that it would be a good idea to distance themselves from the violence and the hostile rhetoric. So on Monday morning Steve Doocy, co-host of Fox and Friends, made a plaintive plea for peace that didn’t go down very well (video below):

“We just know that right now there are a lot of online, very specific threats against very specific agents at the FBI and whatnot. It would be great for everybody to tamp down the rhetoric against the FBI, because the FBI simply was doing what the DOJ asked them to do. The Attorney General is the boss of the guy at the FBI, of all the people at the FBI.”

Then Doocy makes an uncharacteristically rational suggestion that “It would be great if [Trump] called for an end to the violent rhetoric against federal law enforcement.” Indeed. But that’s not Trump’s style. In fact, he has been doing the opposite by inflaming rage on the part of his glassy-eyed cult disciples.

It’s exactly like his response to the the January 6th insurrection in Washington, D.C., where he refused to call on his supporters to terminate their assault on Congress. He watched gleefully from the White House as the riots escalated and his own Vice-President’s life was threatened. It was so brazen that even Rupert Murdoch’s newspapers condemned it.

Trump is doing precisely the same thing now. He is deliberately refraining from calling off his StormTrumpers, because he is hoping for more violence against law enforcement in pursuit of his perverse aspiration to undermine democracy, overthrow the government, and become America’s Fuhrer. Doocy then went on to explicitly propose that Trump’s seditionist hordes shift their violent threats from the FBI agents’ legal search of Mar-a-Lago, to Attorney General Merrick Garland:

“If you want to personify that search, look at the Attorney General of the United States. Merrick Garland is the one who has staked his entire reputation on it. If there’s not something really big there, he’s gone.”

Doocy may have thought he was being responsible by appealing to the decency of Fox News viewers (as if they have any) to refrain from attacking well-meaning law enforcement officers. But he only managed to redirect their anger toward the Attorney General, accusing him of being the evil mastermind and the proper target for the Trump mobs. That’s what Fox News regards as a sensible alternative to declaring a civil war against the federal government. And if any harm should come to Garland, it will just be more blood on the hands of Fox Fox News.

This morning Fox's Steve Doocy repeatedly criticized the right's "harmful rhetoric" against the FBI (rhetoric that's been frequent on Fox). He seemed to be speaking to Trump here: "It would be great if he called for an end to the violent rhetoric against federal law enforcement." pic.twitter.com/NPk2YncaGE