After a week of infighting – and nearly actual fighting – and a historically humiliating fifteen votes, Kevin McCarthy finally squeaked through to realize his dream of being Speaker of the House of Representatives. Although, to get there he had to bargain away much of the power that post has traditionally had. 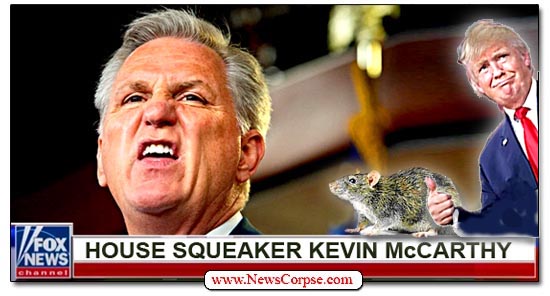 In addition to having been coerced into agreements that make him a puppet of the Republican Party’s fringiest right-wingers, McCarthy also exalted Dear Leader Trump for his contribution to the freak show that resulted in McCarthy’s ascension to Chief Cheese of the GOP. Shortly after the fifteenth vote, McCarthy fulfilled his obligation as a dutiful Trump-fluffer by thanking the Beast of Mar-All-Ego, saying that, “I do want to especially thank [former] president Trump. I don’t think anyone should doubt his influence.”

RELATED: House Squeaker Kevin McCarthy Thanks Donald Trump for Being ‘All In’ on Making Him Speaker

The alleged influence to which McCarthy referred consisted of Trump ignoring the Speaker’s race for the first couple of days as McCarthy was floundering, and eventually weighing in with a comment imploring Republicans to vote for McCarthy, not because he’s deserving, but in order to “WATCH CRAZY NANCY PELOSI FLY BACK HOME!” Even so, there’s no evidence that Trump swayed a single vote.

Clearly Trump’s influence as a Republican leader and wannabe kingmaker has devolved into his being an impotent figurehead to whom no one is listening. Well, no one but himself. In Trump’s acutely damaged, narcissistic neurosis, he is convinced that it was his efforts that pushed McCarthy over the top. And he let his cult followers on his pitifully failing Twitter ripoff, Truth Social, know it by asserting that “I did our Country a big favor!”

As “proof” that he deserved full credit and/or blame for McCarthy’s promotion, Trump claimed that “The Fake News Media was, believe it or not, very gracious in their reporting that I greatly helped Kevin McCarthy attain the position of Speaker of the House.” Then he posted links to eight separate, nearly identical puff pieces by wingnut press regaling his imaginary relevance…

Well, that settles it then. Now we know who to fault when McCarthy flops as Speaker. We know who to hold responsible when his “leadership” results in an economic fiasco due to his defaulting on American debt. We’ll know who gets credit for attempting to cut Social Security and Medicare. We’ll know whose efforts weaken Ukraine’s defense against Putin’s war crimes. We’ll know who cut taxes for corporations and the wealthy, putting the burden on everyone else. And we’ll know who to thank for endless, meritless, revenge hearings aimed at President Biden, his family, and his administration.

It’s all Trump! Because he’s just so influential and essential to everything at all times. Particularly the things that hurt the interests of average Americans, embarrass the nation abroad, and undermine democracy and the Constitution. That’s real influence.

RELATED: LOL: Trump Starts 2023 with a New Year’s Eve Press Conference at Mar-a-Lago but Nobody Came