Fifteen votes. That’s how many attempts it took Kevin McCarthy to attain his longtime goal of becoming the Speaker of the House of Representatives. It is the eighth most ballots cast in American history, and the most since before the Civil War. 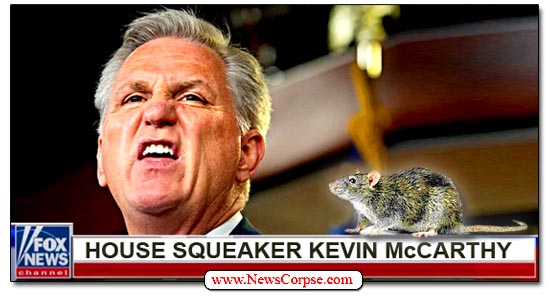 McCarthy’s victory came only after he bargained away a great deal of the power that a Speaker traditionally has held. The beneficiaries of that desperate deal-making were the fringiest of the Republican Party’s right wing, who will now try to hold the House – and the nation – hostage to their uber-conservative commands.

RELATED: Marjorie Taylor Greene: The GOP Will Govern Like the Mafia’s 5 Families in ‘The Godfather’

With that, McCarthy will be a weaker Speaker than any in modern times. One who only managed to squeak through with less than a majority of member votes due to the peculiarities of the process wherein those voting “present” aren’t counted. That lowers the threshold for a majority to only those who voted for someone by name.

Following the fifteenth vote, McCarthy spoke to reporters in the Capitol that was the scene of a violent insurrection two years ago to the day. He didn’t bother to mention that. However, he did give thanks to the person most responsible for those anti-America riots, the twice-impeached, former reality TV game show host, Donald Trump. McCarthy gushed…

“I do want to especially thank [former] president Trump. I don’t think anyone should doubt his influence. He was with me from the beginning. Somebody wrote the doubt of whether he was there, and he was all in. He would call me and he would call others. And he really was – I was just talking to him tonight – helping get those final votes. What he’s really saying really for the party and the country is we have to come together.”

McCarthy: “I do want to especially thank Pres Trump. I don’t think anyone should doubt his influence. He was with me from the beginning. He was all in. What he’s really saying for the party and the country is we have to come together.” pic.twitter.com/KWEFQQAHkn

McCarthy is demonstrating his best qualification for leadership of the Republican Party: Shameless sycophancy. It’s reminiscent of his trip to Mar-a-Lago shortly after the January 6th insurrection to bow to Trump and kiss his… let’s say ring. That was only a few days after he had made a speech on the House floor condemning Trump’s responsibility for inciting the assault.

However, McCarthy is either lying or delusional. The truth is that Trump ignored the Speaker’s race for the first couple of days as McCarthy was floundering. He eventually posted a rather mild comment on his pitifully failing Twitter ripoff, Truth Social, begging Republicans to vote for McCarthy, not because he’s deserving, but in order to “WATCH CRAZY NANCY PELOSI FLY BACK HOME!” Which, of course, wouldn’t happen because she remains a respected member of Congress.

As for whether “anyone should doubt Trump’s influence,” the votes immediately following Trump’s appeal had zero effect on the GOP House members who have been voting against McCarthy. He didn’t sway a single vote. And the last six holdouts still didn’t vote for McCarthy, instead just voting “present.” This is more evidence that Trump’s influence as a Republican leader and wannabe kingmaker has devolved into his being an impotent figurehead to whom no one is listening.

For his part, Trump bragged that the “The Republican Party really came together last night. It was, in so many ways, a beautiful thing to see. HISTORIC!” And he’s right, if by “coming together” he meant doing the least possible to squeak out a win, and by “historic” he meant historically awful and humiliating.

Trump also posted that the prolonged and incompetently managed ordeal may have seemed crazy (it was), but that it really “made it all much bigger and more important.” Kind of like the way slipping on a banana peel makes walking down the street bigger and more important. And if that weren’t enough, the Beast of Mar-All-Ego posted eight (8!) nearly identical articles about McCarthy thanking him.

It isn’t surprising that McCarthy went out of his way to fluff Trump. That’s what political parasites and bootlickers are best at. Likewise, it’s completely in character for Trump to boast about victories that never took place, or for which he had no role. This speaker vote debacle should put to rest whether Trump has any lingering influence. And if you want further evidence…

SEE THIS: LOL: Trump Starts 2023 with a New Year’s Eve Press Conference at Mar-a-Lago but Nobody Came