It has been well documented that Fox News is a disreputable enterprise that shuns any semblance of journalistic ethics. The most recent example, producing and airing an anti-Obama campaign-style video, perfectly demonstrates how far afield they are from a being legitimate news organization. Amongst the traits of Fox News that separate them from the pack is their tendency to attack their peers in the news business. That is almost unheard of from other cable networks, newspapers, or other outlets.

Today Fox News continued in that vein by leaping on the Nielsen ratings reports for May 2012. To be sure, CNN’s ratings were dismal. But so were the ratings for Fox which declined double digits and notched a primetime low that they haven’t seen since 2008. Nevertheless, Fox reported only on CNN’s numbers and ignored their own sickly showing. And nowhere in their story did they note that the decline was primarily due to the inflated ratings in May 2011, when the killing of Osama Bin Laden, hurricanes in the Midwest, and Casey Anthony were dominating the airwaves.

That said, Fox is inadvertently correct about a debacle at CNN, but not the way they mean. CNN is suffering a decline in viewership that is historic mainly because they pioneered the concept of the 24 hour cable news network but are now languishing in last place. But if they are perplexed by the sorry turn of fate they have experienced in recent years it is only because of their own willful blindness to the circumstances that led to it.

When Fox News began to approach and overtake CNN in the ratings, CNN management made the foolish mistake of concluding that Fox’s success was related to their blatant conservative bias and abandonment of journalistic principles. While that was (and is) the model for Fox’s programming, that played only a small part in their success story. The real reason that Fox excelled was that they had switched the deck. They were not in any practical sense a news network. Their programming was (and is) closer to an entertainment channel than anything else. They feature shallow, sensationalistic stories that rely heavily on melodrama, controversy, emotion and sex – the main characteristics of soap operas and reality shows. And they decorate their broadcasts with flashy graphics and sound effects that would be more appropriate for game shows. That’s what draws their viewers in, and that is always more compelling than actual news content.

However, CNN panicked and decided that the way to compete with Fox was to emulate their right-wing partisanship and theatrics. Ironically, even Fox’s business network recognized that emulating Fox News was a losing strategy. Fox Business Network VP Kevin Magee sent a memo to his staff saying that…

“…the more we make FBN look like FNC the more of a disservice we do to ourselves. I understand the temptation to imitate our sibling network in hopes of imitating its success, but we cannot. If we give the audience a choice between FNC and the almost-FNC, they will choose FNC every time.” 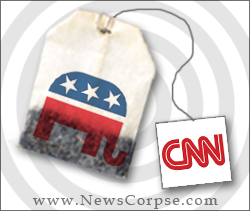 Unfortunately, no one at CNN could grasp that simple truth. Instead they installed Ken Jautz, a rabidly right-wing promoter, as it’s chief. Jautz was the man who gave Glenn Beck his first job in television. Then CNN went on a hiring binge that consisted of the most unsavory figures from Wingnutlandia including: Amy Holmes (of Glenn Beck’s GBTV), Will Cain (of Beck’s The Blaze), Erick Erickson (of the uber-conservative blog RedState), Dana Loesch (of Breitbart News and the Tea Party), and E.D. Hill, a former Fox anchor and Bill O’Reilly guest host, who is most famous for saying that a friendly fist bump between the President and the First Lady was really a “terrorist fist jab.”

CNN demonstrated its new found rightist perspective by producing programming that was straight out of the conservative PR playbook. They were the only cable news network to broadcast live Michele Bachmann’s Tea Party response to Obama’s State of the Union address. They co-sponsored a GOP primary debate with the corrupt Tea Party Express. They also co-sponsored a debate with the ultra-right-wing Heritage Foundation and the American Enterprise Institute.

For a network that claims to be the only truly neutral source for news, CNN has conspicuously failed to permit a representative from MoveOn.org to respond to a presidential address, nor to co-host a debate with the Center for American Progress. They have navigated toward a full-on Foxification of the network without any pretense to objectivity or balance.

And what have they got for it? A steep collapse to last place in the ratings, an embarrassing forfeiture of credibility, a severe loss of viewer loyalty and respect, and the pleasure of becoming a target of Fox’s ridicule.

As a division of TimeWarner, CNN has the resources to brand itself as a powerhouse news provider. They have more domestic and international news bureaus than any television news enterprise. They have access to the talent and technology that could set them apart from their competitors. Yet they fail to take advantage of these assets. And worse, they squander them in the vain hope of being FoxLite.

That’s what I call an historic debacle. And it’s why CNN just posted their worst ratings in twenty years. It’s also why they are now seen as an object of sympathy as Fox News batters them in the ratings and in the press. The first step in rehabilitating themselves would be to recognize their problem and clean house. Then they would need to fight back. If they would aggressively hammer at Fox as a lightweight purveyor of lies in a flashy, soap opera package, they might just begin to recover some measure of pride and start their long trek back to legitimacy.