Stanley Kubrick’s brilliant cinematic satire, Dr. Strangelove, produced one of the most enduring characterizations of the dangers posed by paranoid crackpots in positions of power. His profoundly disturbed Gen. Jack D. Ripper is an object lesson in the risks we face when lunatics are granted authority. 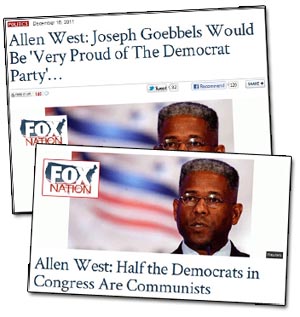 Now, the Congressman most likely to be committed to a mental institution has spoken up again. Allen West appeared on Fox & Friends (Ignoramusi Televiso) this morning to pontificate on the deadly and clandestine “stealth jihad” that is percolating through our nation. West has already distinguished himself as a commie-phobic, Nazi-baiting extremist who engaged in mock executions against innocent Iraqis before leaving the Army and running for congress. He proudly serves on the board of a known hate group. And now he has come to Fox News to express some eerily familiar comments in response to an NPR report that the FBI has investigated cases of alleged radical Islamists in the military:

Col. Allen “Ripper” West: You are witnessing an infiltration of not just the defense systems, but our financial systems, our cultural, religious, political, systems. So this is a whole-hearted stealth jihad type of attack.

First of all…what attack? The FBI’s report has not confirmed a single case of an Islamic extremist infiltrating the Army. Yet West is already speaking in terms of current attacks on a vast array of our national institutions, even though the FBI is not even investigating anything relating to finance, politics or religion. That’s a paranoid escalation of the story hatched in West’s demented imagination. The story by NPR speculates that the FBI’s action may just be an over-cautious response to the deadly shootings at Ft. Hood that caught the Army and law enforcement by surprise. However, Fox portrays it with graphics that state as a matter of fact that there are presently “100 Muslim extremists in the U.S. military.” 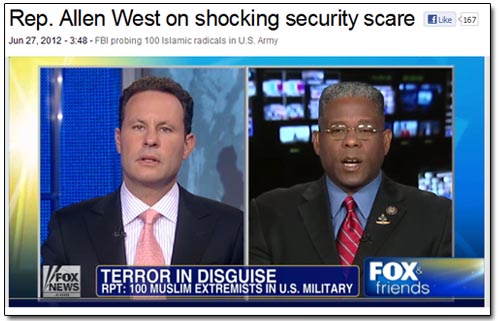 Leave it up to Allen West (who thinks the Congress has been infiltrated by communists) and Fox News (who hype phony scandals 24/7) to push the panic button and raise the level of hysteria to its limits. They are shamelessly hyping threats that do not exist in order to stir up fear in the hearts of their dimwitted audience. They might as well bring back Gen. Ripper. He’d make a good host to follow the O’Reilly (Fear) Factor.