Today Fox News published a story on their Fox Nation web site about an alleged sexual assault on a four year old child. That is always a tragic occurrence under any circumstances and perpetrators should be severely punished.

The problem with Fox’s coverage of this crime is that, for some reason, they thought it was necessary to include in their headline a detail of the investigation that has absolutely no bearing on the actual crime.

By highlighting the allegation that the suspect is an “illegal alien” the only purpose that Fox can hope to serve is to exacerbate racial animosity against Latinos and imply that they are inherently perverted and dangerous. There are, sadly, way too many sexual assaults against children, but the race or religion of the perpetrator sheds no light on the crime. Unless there is some pattern of behavior that merits investigation, it would be absurd to slander any particular group for the actions of an individual. The frequency with which such crimes are committed is reason to be concerned, but no racial, religious, or national group has a monopoly on either morality or evil.

Fox News has never published a story about a criminal act that featured a headline declaring, “White Protestant American Charged with Raping 4-Year-Old.” The reason for that is that they have no agenda to denigrate white Protestant Americans, even thought there have probably been more molesters in that group than among undocumented immigrants.

If Fox News were truly “fair and balanced,” they would have featured a story about their own Charles Leaf, a Fox reporter who has been charged with sexually assaulting a four year old girl and for possession of child pornography. Leaf was a frequent presence on Fox News when they were attempting to smear the builders of a mosque in Lower Manhattan. After his arrest he seemed to fall off the face of the earth with no mention by Fox of their feature reporter’s sudden disappearance. 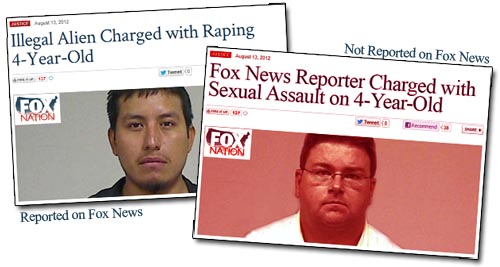 If it is important for a Fox headline to note the citizenship status of a crime suspect, than it is just as important to note his profession and affiliation with the network. This is particularly true when, as I noted above, a pattern of behavior exists. With respect to Fox it should be noted that other Fox News personalities have exhibited perverse tendencies, including Bill O’Reilly who paid a multimillion dollar settlement to a former producer whom he sexually harassed, and Dick Morris who was caught sucking the toes of a prostitute whom he let listen in on phone calls to President Clinton.

So parents, if you love your children, keep them as far away from Fox News as possible.