GOP whackadoodle congressman Allen West has once again demonstrated the classlessness of the Republican Party. During an appearance on Fox News with Neil Cavuto, West went on another deranged rant against President Obama saying…

“Let’s be very honest and let’s put this military vernacular. If you’re feeding a person a crap sandwich with a smile, it’s still a crap sandwich. That’s what you see coming from President Obama. He said America is just a load of you know what.”

I would challenge West to document his claim that Obama ever said that America is “a load of you know what.” Obviously, that never occurred. However, West has said…

Allen West is certainly one of the most mentally unstable people who was ever elected to office. He was virtually thrown out of the military after being fined and reprimanded for engaging in torture against innocent Iraqi citizens. And now he has the gall to talk about crap sandwiches. This inane and tasteless crack was featured as the top headline story on Fox Nation this morning. I particularly enjoyed the fact that it was accompanied by an advertisement for Whataburger. 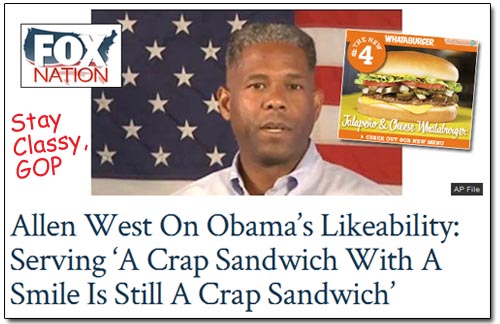 West’s opponent for the 18th district congressional seat in Florida is Patrick Murphy. Feel free to toss him some support. And here’s his latest ad that shows that he has a pretty good sense of humor and an eye for creative messaging.

2 thoughts on “Allen West’s Crap Sandwich: You Want Lies With That?”