The Swiftboating campaign against President Obama has just launched another lame attack ad by a group of veterans pretending to be patriots. The ad exhumes a ridiculous claim that Obama is undercutting America’s role as a superpower by bowing to foreign leaders. 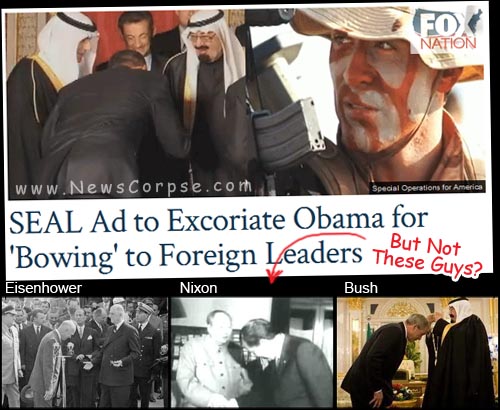 Sadly, it appears these former Navy SEALs have suffered some pretty debilitating head trauma, because their advertisement is such an idiotic piece of garbage that no one with a healthy mental condition would ever associate themselves with it.

President Obama shows respect for the leaders of other countries, something that Bush refused to do. The Republican foreign policy agenda has seriously harmed America’s standing in the world through its obsession with military and economic threats. And as the picture above makes clear, it is not a sign of weakness to respect your world neighbors. In fact, it produces greater strength through alliances and mutual trust.

The performing SEALs who appear in these ads are not diplomats. They are former soldiers whose area of expertise clearly does not include international affairs. They have crafted a campaign that is so embarrassingly stupid that it’s surprising that they actually made it public.

And helping them to expand the reach of this nonsense is the right-wing media who must also be lacking in the intelligence department. Fox News and Breitbart News, amongst others, are heavily promoting this new video in the hopes of slandering the President with any mud that might happen to stick. It is a sign of desperation that they think these phony, substanceless ads will sway voters. What’s more, it’s an insult to voters who will see right through this charade.

So, in the end, the puny minds who concoct these asinine schemes will be wasting their money and alienating the vast majority of the public who do not believe that Obama is a traitor. The only people who will pay any attention to these ads are the birthers, truthers, and other morons who are already on the other side of the political battle. And, frankly, I’m glad they are. I wouldn’t want those idiots on my side.

2 thoughts on “More Swiftboating Of Obama From Performing SEALs”