The Democratic National Convention last week provided an opportunity for MSNBC to introduce themselves to a wider audience. And that they did. The channel was viewed in primetime by more than nine million people during the three days of the convention. That’s nearly 10% higher than the RNC viewership. And for the first time ever they scored a ratings victory over top-rated Fox News for a full week.

With the conventions over MSNBC still has the glow of victory about it. On Monday September 10, Rachel Maddow beat Sean Hannity by 12% in the key 25-54 year old demographic. Lawrence O’Donnell had an even bigger margin of victory (29%) over Greta Van Susteren. And for good measure, the repeat of The Ed Show beat the repeat of the O’Reilly Factor, and Maddow’s repeat beat Hannity’s. That’s four solid hours on top for MSNBC.

These wins were achieved without the help of the convention. And the programs on Fox were stacked with guests that should have been big draws for them. Hannity featured Tea Party darling, Sen. Rand Paul. Van Susteren touted an exclusive with Rep. Darrell Issa who has been hammering the Obama administration over the salacious (and phony) Fast & Furious controversy.

If MSNBC can hold just a portion of these numbers over time, it could signal a turnaround in the cable news hierarchy. MSNBC has not been particularly successful in building their audience, while Fox has masterfully captured the glassy-eyed disciples of conservatism. Time will tell if this is a blip or a trend.

In related news, the Pew Research Center for the People & the Press released their post-convention survey of attitudes and opinions of the candidates and their events. The headline notes that President Obama was overshadowed by keynoter Bill Clinton. That provides a stark contrast for the RNC where Mitt Romney was similarly overshadowed by Clint Eastwood. Who would you rather be overshadowed by? And Fox News viewers affirm Pew’s findings: 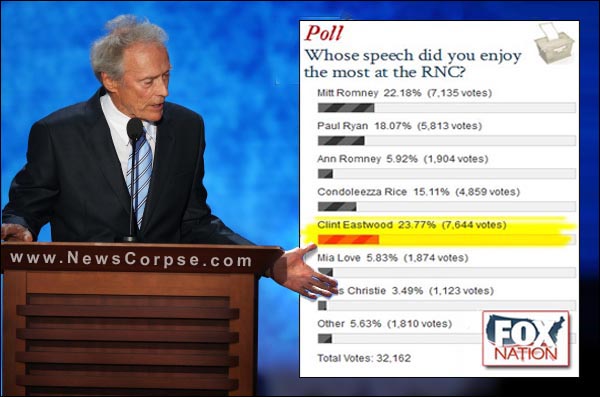 3 thoughts on “Even MSNBC Gets A Convention Bounce: Still Beating Fox News”