This coming Sunday 60 Minutes will broadcast a report on Alabama’s former governor Don Siegleman. Siegleman is presently serving a seven year jail term for a bribery conviction that is considered suspicious by Democrats and Republicans alike. Many believe that the case was politically engineered by some familiar names in the Dirty Tricks business:

“A Republican operative in Alabama says Karl Rove asked her to try to prove the state’s Democratic governor was unfaithful to his wife in an effort to thwart the highly successful politician’s re-election.”

While the ethical underhandedness of a manufactured prosecution that lands an innocent man in prison is disgusting on its own, there are other questions raised that will likely not be answered by this scandal’s principal player. Karl Rove, Fox News’ newest contributor, has refused requests by 60 Minutes to comment, but he will continue to appear as an election analyst on the Fox News Channel.

What I want to know is: How can this guy appear on Fox air, with reporters questioning him about the presidential campaign, without being made to answer questions about the political controversies swirling around his own life? How can Fox anchors sit next to him, pretending these issues don’t exist, and still be called journalists? Yeah, I know…no one calls them journalists now, but this would be like hiring O.J. Simpson as a crime reporter without ever mentioning Nicole and Ron.

I probably shouldn’t be giving Fox any ideas. After all… 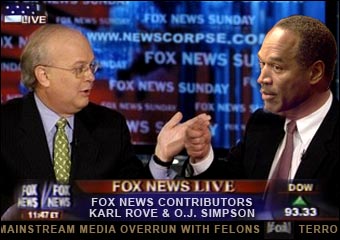 …it was the Murdoch- owned ReganBooks that published Simpson’s “If I Did It” and tried to air a shlockumentary based on it on Fox, before they were shamed into ditching the program. Judith Regan was subsequently fired as a sacrifice to protect Murdoch and others who had greenlighted the projects.