Glenn Beck and professional wrestling. Who could have imagined a collision between these two disparate media phenomenons?

After all, one of them is perhaps the most notorious entertainment spectacle of the last fifty years and involves a highly choreographed production of television broadcasts that purport to be genuine, but are in fact as phony as Bigfoot’s Snake Oil Elixir. Nevertheless, it hooked a surprisingly large audience of gullible viewers starved for over-the-top melodrama and sweaty, wild-eyed brawls.

And the other one is professional wrestling.

Indeed, Glenn Beck’s Acute Paranoia Revue and Holy Huckster Sideshow seems like the perfect match up with pro wrestling. They are both so divinely cartoonish and dripping with cheap theatrics that it’s a wonder someone hadn’t thought of it sooner. But Sadly, it’s not to be. 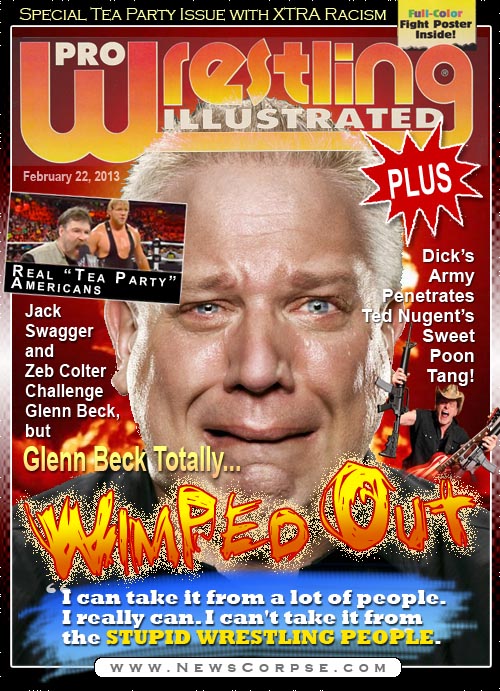 After the WWE debuted a couple of characters modeled after Tea Party wackos, Beck bounded into the proverbial ring to slam the sham Teabaggers and the horse they rode in on. That horse, by the way, was the property of two-time Teapublican senate loser, and WWE’s owner, Linda McMahon. Clearly this is not an organization run by Obama functionaries or progressive rabble.

Dimwitted wrestler Jack Swagger and his hillbilly manager Zeb Colter were a pretty accurate representation of the rednecks who mindlessly spew patriotic jargon and blame all their failures on minorities. But Beck wasn’t having it. He declared that he was sick and tired of being miscast and wasn’t about to allow these twits to besmirch the image of his precious Tea Party. With classic WWE bravado Beck taunted his nemeses saying…

You can almost imagine him center-ring, yelling that into a microphone hanging from the ceiling. This is the Beck who has called himself a rodeo clown and just last month said that he considers what he does to be “like circus performer art.” Having thrown down the gauntlet, the ball was now in the court of the wrestling duo. So Swagger and Colter struck back inviting Beck to appear on their show and defend the honor (such as it is) of “We the Teaple.” In a video challenge they said…

“You know, Glenn, many of your followers are WWE fans and they understand the difference between reality and entertainment. Are you so out of touch with your own audience, Glenn, or are you just a ‘stupid’ political commentator.”

They were obviously giving Beck’s fans more credit than they deserved with regard to their alleged understanding of reality. But they were also giving Beck a sterling opportunity to address the millions of WWE viewers (10 times more than any audience Beck ever had), and explain why Swagger’s character offended him. But rather than meet his opponents in the ring, Beck pulled the covers up over his head and tweeted that he is “currently booked doing anything else.”

It’s inevitable that big-mouths like Beck reveal themselves to be cowards. But this exceeds all boundaries of wimposity. Beck is trembling before fictional foes. It would be one thing if Beck was afraid to debate Rachel Maddow or Bill Maher, experienced communicators who have obvious intelligence and wit. But to shrink from facing off with a fake adversary on a scripted television farce demonstrates just how paper thin Beck’s veneer of bombast really is.

One thought on “Let’s Get Ready To CRUMBLE: Glenn Beck Ducks WWE Challenge”