“Repulsive” doesn’t begin to describe the latest foul excrement to spew from the dessicated lips of Satan’s own schlockmeister, Bill O’Reilly. 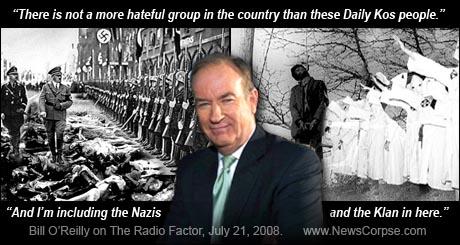 It is just unimaginable how much stored bile must be pressuring the interior of his putrid skull that he would sink to comparing fellow Americans, who passionately embrace Democracy, to the inhumane and murderous cults of Nazism and Klan hatred.

O’Reilly has every right to disagree with any group he cares to, but the Netroots Nation conference, and the DailyKos community from which it sprang, are the sort of caring, involved, and dedicated citizens that make Democratic government possible. For O’Reilly to gush this vomitous slime is so far removed from civil behavior that it speaks only to the severity of his psychosis.

What’s worse is that, at the same time that he is slandering these good people, he is trivializing the horrors wrought by the real terrorists in swastikas and hoods. He is dishonoring the millions of victims of Hitler’s madness, and thousands more right here on American soil who were tortured and killed by people (like O’Reilly) who consider themselves patriots.

There is apparently no bottom to O’Reilly’s demon soul. Listen for yourselves:

2 thoughts on “Bill O’Reilly, Nazis, and the Klan”