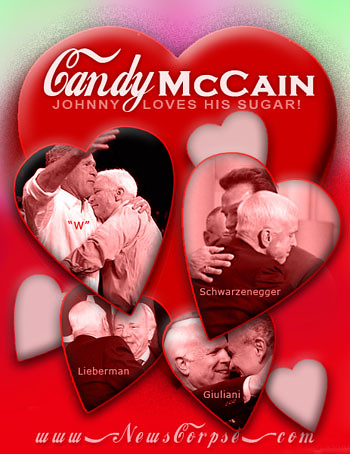 John McCain’s campaign is floundering and desperate. He is bankrupt both financially and intellectually. And nothing illustrates this more than his pathetic attempts at self-promotion through media manipulation. Rather than present his policies and personal attributes to sway a skeptical electorate, McCain has opted to beg for attention from the press and hope they favor him with some attention.

Much of the time that Barack Obama has been overseas, McCain has been complaining that he is being ignored. He is whining that the three network anchors are ditching him to tag along with Obama. Never mind the fact that he isn’t making any news, he believes that his adventures in Kennebunkport and fundraising events warrant the same reception that Obama gets while meeting with world leaders in war zones.

McCain’s campaign reacts to all of this by manufacturing news. His staff punks Robert Novak into publishing a tip that McCain will name his VP pick this week. Now Novak suspects that it was never true and he calls it “pretty reprehensible.” But it bought him some free press.

Earlier this week, McCain submitted an op-ed to the New York Times as a putative response to a previously published op-ed by Obama. The Times rejected the piece as lacking substance or even relevance to Obama’s article. The McCain camp, along with most of the rightist rabble, giddily declared that this is proof of media bias. In fact, it is merely proof that respectable news organizations will not allow themselves to be exploited by wily campaign media hacks (sometimes). Since McCain’s op-ed was not responsive to Obama’s, and it offered nothing newsworthy of its own, it was nothing but fluff and undeserving of publication.

Now McCain is supposedly preparing to release a new ad (below) that portrays Obama as a media darling. The ad is titled “Love” and his website introduces it saying…

“It’s pretty obvious that the media has a bizarre fascination with Barack Obama. Some may even say it’s a love affair.”

I actually agree that the press is fascinated with Obama, although there is nothing bizarre about it. He is the first African American ever nominated for president by a major party. He is a relative newcomer to the national political stage. And he is generating more interest from voters than any other contemporary politician. McCain, on the other hand, has been in Washington for thirty years. He has run for president before. And from the public he is eliciting not much more than yawns, even amongst many Republicans. It would be bizarre if the press were not fascinated with Obama.

In addition, the new ad seems to inadvertently boost Obama’s profile. The intent of the ad is to show the quantity of positive references to Obama by various media figures. But the result is that it affirms that there is an abundance of positivity surrounding Obama. Many viewers will retain the impression that Obama is very well liked and forget any points made regarding media coverage. McCain’s previous ad (“Gas Pump”) had a similar effect. At the end, it asked who was responsible for higher oil prices, and answered the question by playing a recording of a crowd chanting “Obama!” Again, the audience will likely recall the display of adulation and not what question was asked.

However, the big problem with the new ad is that it will never appear on TV. The whole ad campaign is a fraud. Notice that it is just under 3:00 minutes long? That is far too long for broadcast. The only purpose of announcing it now is to get the media to report on the ad and have it broadcast as part of editorial coverage. McCain is angling for free media. Will the press allow themselves to be used this way? Probably. Especially the cable news nets who have an insatiable appetite for pre-produced video and lots of time to fill.

They are resorting to the only thing they have left: Begging for free media.

Update: As if to punctuate the analysis above, the McCain campaign has helpfully announced a pitiful response to Obama’s trip overseas. McCain has purchased ad time in American cities with the same name as the cities Obama is visiting (i.e. Berlin, WI, Paris, ME).

This is further evidence that McCain is still praying for free media as these are small markets that will have little impact on national trends. He’ll get some, of course, from Fox News. But this ad buy comes at the same time that Obama announced his $5 million purchase of air time during the Olympics. So while McCain is making penny ante, symbolic ad buys, Obama is going for the Gold. Nice juxtaposition.