Last week the Senate Intelligence Committee released its report on the CIA torture program that was used to extract information from alleged terrorists. The report revealed a disturbing pattern of unlawful activities that failed to produce much, if any, useful intelligence.

The resulting controversy ignited a much-needed debate on the questions of law and humanity. Most conservatives and Republicans were outraged that the report was made public. In fact, they were more upset with the publishing of information derived from taxpayer-funded investigations than they were with the revelations that our national security apparatus was flagrantly violating the standards of decency as well as international and domestic law. And lacking any reasonable argument to defend the actual practice of torture, they attempted to divert the discussion to the public exposure of it.

Another diversionary tactic taken up by the right was to seek an equivalency between the torture program that was mainly advanced by the Bush administration and other programs with similarly questionable methods that could be attributed to President Obama. To that end, Fox Nation posted an article sourced to the Washington Examiner that asked “Liberal Hypocrisy: Why No Soul-Searching On Drones?” 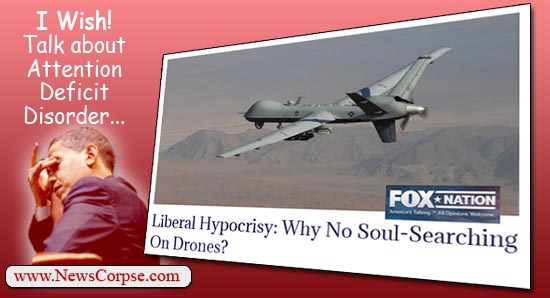 That would be an excellent question except for the fact that its premise is so far removed from reality you have to wonder where these quibblers have been for the past six years. The article complained that…

“President Obama and his allies are quick to denounce harsh interrogation techniques as torture, framing the renewed scrutiny of Central Intelligence Agency methods as crucial to restoring U.S. moral authority on the global stage.

“They are less eager, however, to apply the same standard to the administration’s reliance on remote-controlled, targeted killings, a drone campaign that critics say invites natural comparisons to extreme interrogations employed during George W. Bush’s presidency.”

How they surmised a lack of eagerness on the part of liberals to renounce drones is a complete mystery. Liberals were the first, and most vociferous, critics of Obama’s drone policy. There is ample evidence that goes back to the very first days and weeks of his presidency. These early critics came from the most staunchly progressive media outlets and were expressing their consistent opposition to practices that demonstrated a lack of respect for human life and suffering. For example:

These are typical of the harsh judgments aimed at the drone programs implemented by the Obama administration by liberal persons and institutions. It has never been ambiguous where progressives stand on this issue. And while there have been some critics of drones on the right, for the most part the same wingnuts who favor torture have been supportive of drones.

In addition to those listed above, filmmaker Robert Greenwald of Brave New Films directed and released a full length documentary blasting drones titled Unmanned: America’s Drone Wars. And some the favorite targets of conservative wrath – comedians – were also among the most biting critics. Stephen Colbert took on the drone issue, as did his colleague Jon Stewart in “Romancing the Drone.” Perhaps the most searing (and hilarious) beating the drone issue has taken was delivered by John Oliver in an extended and entertaining harangue. Sit back and enjoy the show. And don’t let the phony protestations of Fox News fool you into thinking that liberals never took aim at any drones.

And Speaking of Fox Nation, You Can Now Get
The ALL NEW 2nd volume of
Fox Nation vs. Reality: The Fox News Cult of Ignorance.
Available Now At Amazon.

With the passing of Farrah Fawcett, there will be endless references to her beauty, to her smile and hair and the figure so famously captured in a poster. But there is much more to this woman than the surface assets that fueled her celebrity.

After her star-making role in Charlie’s Angels, Farrah was cast as a victim of domestic abuse in the television drama, “The Burning Bed.” It was a role that required her to challenge the critics who, at the time, dismissed her as eye candy. It was a role that called for her to set aside her most bankable qualities and portray a character that was often grotesquely beaten and painful to look at. And it was a role that was controversial in its day, not just for addressing a subject about which few people spoke, but for the assertive, defiant, and aggressive response of the character she played.

The Burning Bed was directed by Robert Greenwald who now runs Brave New Films, a progressive production company and Internet enterprise. The TV movie was nominated for eight Emmys, including Outstanding Directing and Outstanding Lead Actress. Amongst Greenwald’s more recent projects is the brilliant “Outfoxed.”

While Greenwald has gone on to be a profound spokesman for progressive causes, Farrah became a featured guest at conservative events. Yet they never lost their affection or respect for one another. The Huffington Post has just published Greenwald’s account of his last meeting with Farrah a month ago. He recalled their working together:

“I was directing her for the first time and her fearless commitment to going to the darkest places emotionally never wavered. She never hesitated when I took her to battered women’s shelters. To interview women with painful stories.

And she never flinched when I described how we needed to take away her wonderful beauty and life force to make the film and role authentic.”

In her final months, Farrah demonstrated her unique courage by being uncommonly public about the dire state of her health. She appeared in a gut wrenching documentary, “Farrah’s Story,” that chronicled her search for a cure. The ultimate result of her generous accessibility will be to empower others to face and fight the misfortunes in life that most of us will encounter at some point. The same is true for her contribution to the fate and strength of women in destructive relationships that she brought to the forefront of the national dialogue more than twenty years ago.

Robert Greenwald of Brave New Films has come into possession of the super-secret, leaked interview of John McCain by George Stephanopoulos. From The Real McCain:

BNF is also asking for contributions of satirical questions that Stephanopoulos might ask McCain. Of course, considering the debate a few days ago, where does reality stop and satire begin? Here are my suggestions:

On tonight’s edition of the O’Reilly Factor, Bill O’Reilly resumed his repulsive assault on homeless veterans. This would be a despicable act under almost any circumstances, but O’Reilly engages in his slander in an attempt to defend his own tattered ego.

The trigger for his onslaught was the delivery of a petition signed by 17,000 people who believe that O’Reilly should apologize for his misstatements and disrespect for homeless veterans. The signatures were gathered by producer Robert Greenwald of Brave New Films. In the plaza in front of the News Corp. headquarters, the group was met by O’Reilly’s producer, Stuttering Jesse Watters. They were not allowed into the building to deliver the petitions.

On his program tonight, O’Reilly led off by mocking Greenwald for a film he made 30 years ago. Admittedly Xanadu was not a box office bonanza at the time of its release, but it has since become something of a cult classic and it didn’t lose money either, earning $22 million and ranking #28 amongst all films released in 1980. That put it between Raging Bull and American Gigolo. Its soundtrack, however, was a bona fide hit reaching #4 on the album charts and spawning 5 top 20 singles. A stage adaptation is presently in its 7th hit month on Broadway where it broke opening day records for the Helen Hayes Theater. Consequently, O’Reilly’s snide sarcasm about Greenwald not being able to find a job is really just another example of his own mean-spirited and dishonest boorishness. And that’s aside from the fact that it is entirely irrelevant to the sad and serious matter at hand.

O’Reilly goes off on another tangent to criticize Steve Capus, President of NBC News, because his office couldn’t (or wouldn’t) respond to a query as to why NBC sent a crew to cover the event. O’Reilly then advised Capus to “pay attention to his job.” However, the job of the president of a news network is not to trace the steps of hundreds of news personnel in the field. Maybe O’Reilly should ask Roger Ailes if he knows where all of his crews are at any given moment. Then O’Reilly asserts that the reason that Capus is “going after” Fox News is because “we’re kicking their butt around the block.” That is, of course, an unmitigated lie. NBC News is currently the #1 news network with the #1 nightly news program and the #1 morning news broadcast. O’Reilly may have meant to limit his hyperbole to cable news networks, but he specifically referenced only NBC, which he has maligned in the past as a failure even though the opposite is true. He never mentioned MSNBC, which is trailing Fox News in the ratings, but is growing much faster. But again, how does this help homeless veterans?

Eventually O’Reilly got around to expressing his true feelings by seeking to ridicule the participating vets because they did not watch his program and didn’t hear his offensive remarks themselves. It must not have occurred to him that homeless vets may not have televisions or cable TV subscriptions. To the contrary, he believes that they all have color TVs and DVD players and air conditioners and cars and more. He said as much on his program last month in a diatribe riddled with falsehoods and faulty analysis. So because these troubled vets were told about O’Reilly’s insensitive and false comments, rather than seeing it for themselves on their nonexistent sofas in their nonexistent homes, O’Reilly now claims to feel sorry for them. Not because they are living on the streets of a country that seems to have forgotten them, but because he thinks that they are being exploited by the people who are, in fact, trying to help them.

O’Reilly has stated several times now that he would provide help for any homeless vet if only he knew where one was. He has since had numerous responses, including one from Keith Olbermann that included a precise location in New Orleans where more than 200 suffering souls could be found. I wouldn’t put much faith in O’Reilly’s empty promises, though. I hope they’re not waiting for him to show up with blankets and sandwiches and vouchers for shelter. I would rather rely on the incompetence of FEMA than the sanctimony of Bill O’Reilly.