A few weeks ago the Democratic National Committee chair, Tom Perez, announced that there would be no Democratic primary debates hosted by Fox News. There was considerable debate over whether this was a constructive policy, even though Fox News itself virtually validated it by repeatedly demonstrating their abject hatred for Democrats and their all-consuming adoration of Donald Trump.

Now a new survey affirms the decision to banish Fox News from the Democratic primary schedule. Navigator Research interviewed 1,000 voters to ascertain the ideological gaps between members of both parties and their viewing of Fox News. The results were published in their paper: “Stepping Inside the Fox Hole, The Media Echo-Chamber of Fox News,” It revealed stark differences that were directly attributable to frequent exposure to the propaganda on Fox. According to Navigator Research:

“There is an alternate reality in American politics, and it plays an outsized role in the way many experience and form opinions on the most important issues facing the country. Progressives should be mindful of the challenge from the Fox News echo-chamber and how it skews public perceptions. […] The influence of Fox News Channel is undeniable: from their audience to their biggest promoter, President Trump.”

The report went on to note that there was “near unanimity” between the Fox News viewing Republicans (what they call the “Fox Hole”) and the Trump world of “alternative facts.” These voters have opinions that are “vastly different from the rest” of the American people, and even from other Republicans who don’t watch Fox. For instance:

What this tells us is what many of us have already known for years. Fox News viewers are a segment of the electorate who are almost completely unpersuadable on political matters. They are no more open to debate than members of a cult. Democrats appearing on Fox News have practically no opportunity to change the minds of anyone in their audience. It’s a total waste of time and resources.

But the Republicans watching Fox News – The Fox Holes – are cemented into their Trumpist mindset and are unavailable to Democratic arguments or ideas. So the DNC was right to reject Fox News as a primary debate host (although the general election debates are another matter). And Democrats should feel no need to accept invitations to be cannon fodder for biased and bigoted Fox News interrogations. 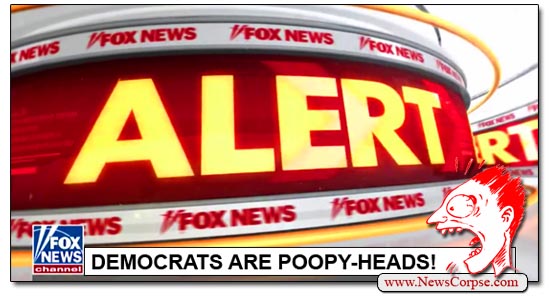 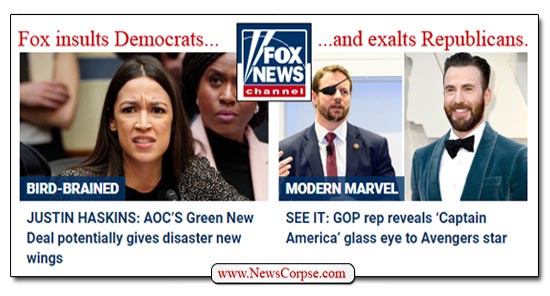 A few weeks ago the chairman of the Democratic National Committee (DNC), Tom Perez, was asked by Fox News anchor Bret Baier whether he would consider scheduling a Democratic Party primary debate on Fox News. Perez responded saying “Absolutely, we’re having discussions with Fox and others.” That reply was widely criticized by Democrats appalled at the notion of rewarding the propaganda arm of the Trump White House with that kind of opportunity to continue their campaign of political sabotage.

However, after the publication of Jane Mayer’s article in the New Yorker that detailed the all-consuming embrace between Donald Trump and Fox News, it appears that Perez has had a wise and welcome change of heart. He now says that:

“I believe that a key pathway to victory is to continue to expand our electorate and reach all voters. That is why I have made it a priority to talk to a broad array of potential media partners, including Fox News. Recent reporting in the New Yorker on the inappropriate relationship between President Trump, his administration and Fox News has led me to conclude that the network is not in a position to host a fair and neutral debate for our candidates. Therefore, Fox News will not serve as a media partner for the 2020 Democratic primary debates.”

That decision should have been an easy one from the start. Fox News has not made a secret of it’s prejudices. They spend twenty-four hours a day promoting Trump as the savior of America, shielding him from any and all criticism, and viciously maligning Democrats and others who dare to challenge Trump’s divine right to absolute power.

It’s tempting to invoke analogies about putting foxes in charge of hen houses, but that’s way too easy. It would have to also include hiring Colonel Sanders to run the operation. And if anyone isn’t convinced that Fox News is unfit to produce an impartial and nonpartisan debate program, here are some recent segments that Fox has aired that reveal the extremities of their bias:

Can anyone make a credible case for the network that spews those lies and slander to host a debate by the party they have been unambiguously trying to destroy? Well, Fox News senior vice president Bill Sammon can. He said that:

“We hope the DNC will reconsider its decision to bar Chris Wallace, Bret Baier and Martha MacCallum, all of whom embody the ultimate journalistic integrity and professionalism, from moderating a Democratic presidential debate. They’re the best debate team in the business and they offer candidates an important opportunity to make their case to the largest TV news audience in America, which includes many persuadable voters.”

There is so much in there that is just plain nonsense. To begin with, it’s already been established that “journalistic integrity and professionalism” is nonexistent on Fox News. They do not have “the largest TV news audience in America.” In fact, Rachel Maddow of MSNBC has beaten her competition, Sean Hannity, nearly every night for four straight months. And Fox’s audience is the least persuadable bunch of right-wing cult worshipers in TV land. They are more reliably Republican voters than even members of the GOP. There simply isn’t a significant number of Fox News viewers who will ever vote for a Democrat.

Nevertheless, Fox News still believes that they should get a chance to host a Democratic debate. Despite being a network whose hosts and contributors have universally banded together to disparage special counsel Robert Mueller – an American hero who has devoted his entire life to public service – as a corrupt, conflicted, Stalinist, traitor to America. They remain silent when Trump calls the media “the enemy of the people.” creating an environment that encourages censorship and violence. They have advised Trump to act illegally by ignoring judicial rulings and issuing executive orders that violate the Constitution. And no one on Fox said a word when Trump declared that he knows – and could name – Democrats in Congress who hate America.

Does that sound like a network that should be allowed to host a debate by members of the party that they are railing against in the most despicable terms? Obviously Perez came to his senses by nixing Fox as a debate host. And if anyone thinks that it’s discriminatory, just remember that Trump has already nixed the networks that he doesn’t like. While he has give more than forty interviews to Fox News, he has given zero to CNN and MSNBC. And he is supposed to be the president of all the people, not just the GOP/Trump-friendly ones he finds at Fox News. The Democratic Party has no such obligation. And they certainly have no obligation to present themselves to their sworn enemies for an orchestrated political assault.

UPDATE: Naturally Trump weighed in on this via Twitter:

Democrats just blocked @FoxNews from holding a debate. Good, then I think I’ll do the same thing with the Fake News Networks and the Radical Left Democrats in the General Election debates!

Which is funny, because he actually boycotted a Fox News debate himself. It was because he didn’t like Megyn Kelly who was one of the moderators. Now he’s all verklempt because Democrats don’t want to legitimize a network that does nothing but insult them.

Also, Trump has already done the same thing. He’s given 40+ interviews to Fox and zero to CNN and MSNBC. What’s more, most Americans would love it if he boycotted debates not on Fox. The less of him, the better.