And now, as the 2016 presidential campaign consumes its final hours, the evidence of its historic peculiarity becomes unmistakable. Fox News has spent the past year and half trying to package Donald Trump as a reasonable choice to lead the free world. At the same time they have been blistering Hillary Clinton with vicious attacks, many made up out of thin air. But nothing could have prepared us for the segment Monday on Stuart Varney’s Fox Business program. 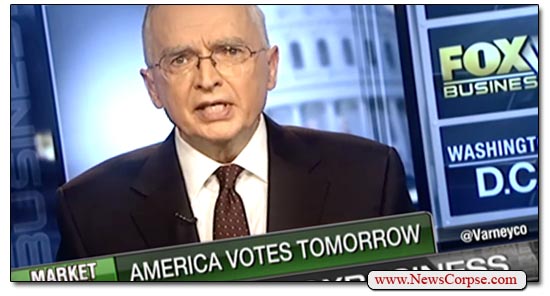 Varney hosted Lt. Col. Ralph Peters, one of the most wild-eyed, vitriolic members of the Fox Contributor Corps. Peters is notable for his unhinged tirades against America’s bitterest enemy, Barack Hussein Obama. One especially deranged Obama rant (also on Varney’s show) saw Peters become hopelessly overcome with loathing. In mid harangue he blurted out that “This guy is such a total pussy it’s stunning.” That earned him a mild rebuke from the host and a two week suspension.

However, on Monday Peters made a shocking announcement with regard to the presidential election (video below). Despite his radically right-wing views, Peters affirmed that he will be voting for Hillary Clinton for President of the United States. Of America! But his endorsement was somewhat, let’s say unconventional:

OK, so it’s more of an anti-endorsement of Donald Trump than an endorsement of Clinton. But his explanation of what he finds so objectionable about Trump is worth noting:

“I don’t want Moscow’s man in the White House. I know I could be a lot more popular this morning if I said ‘Trump’s the Messiah, I’m gonna vote for him.’ This is about the future of our country, it is about our security. And here’s a guy who apologizes for everything Vladimir Putin does and makes crazy remarks about NATO, about Syria, about nukes, about the Mosul offensive. And, oh by the way, about foreign trade. Do you want a global recession? Do you want to see your portfolio really tank? Sure, just walk away from all our trade deals.”

Peters’ sacrilege clearly bothered Varney, who made a valiant effort to bring him back into the Fox fold. Varney tried to explain his reasons for being a Trump supporter. Let’s just set aside the impropriety of an alleged “news” anchor announcing that he’s a supporter of a political candidate. His reasons rest on his desire for an economic growth plan that will spur prosperity. So he ought to be supporting Clinton, whose continuation of Obama’s expanding economy, and record eighty consecutive months of job growth, is what he professes to want. Peters responded accordingly by asking with regard to Trump:

“Where is the plan? Show me the plan. Of course we want growth. He is lying to the American people. He is lying to blue collar workers and that is the background I come from. The village blacksmith shop is not coming back. People need skills for the jobs of the future and this cult of Trump is going to lead a lot of places.

“Look, Hillary Clinton’s domestic policies repel me. She is awful, but she is safer for this country’s security than Donald Trump. And I think Vladimir Putin has a deep hold on Trump and we should all be much more alarmed than we are.”

To reiterate, Peters is the guy who thinks Obama is a pussy. But he’s supporting Clinton because she’ll keep us safe and Trump is Putin’s puppet. If it weren’t on video it would be easy to dismiss as a prank or a lost SNL sketch. As it is, it may be the best Clinton endorsement we’re gonna get from a Fox News pundit. And it seems fitting to end the campaign season with an arch-conservative blowhard throwing Trump under the bus and backing up a couple of times to make sure he’s thoroughly flattened.