Fox News might want to have their White House correspondent, Peter Doocy, examined by a mental health expert. He keeps displaying signs of masochism or other self-destructive behaviors whenever he is around President Biden’s press secretary, Jen Psaki. 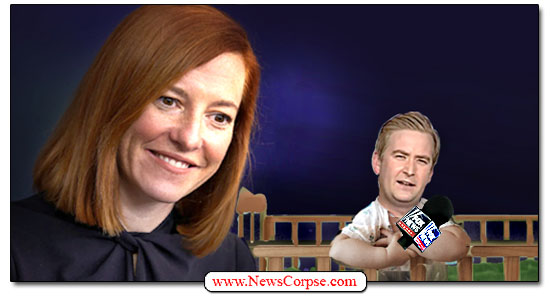 On Monday Doocy took his seat in the press briefing room and waited to be called upon to ask a question. When his opportunity came he proudly inquired as to certain procedures that are followed for testing refugees and migrants for the coronavirus. Unfortunately, he didn’t seem to understand even the most basic differences between the handling of migrants as opposed to citizens. So Psaki had to school him like a child:

Doocy: If somebody walks into the country right across the river, does somebody ask them to see their vaccination card?
Psaki: Let me explain to you again, Peter, how our process works. As individuals come across the border they are assessed for whether they have any symptoms. If they have symptoms the intention is for them to be quarantined. That is our process. They are not intending to stay here for a lengthy period of time. [Doocy interrupts to draw parallels with people flying into the U.S.]

Psaki: I don’t think it’s the same thing. It’s not the same thing. These are individuals as we’ve noted and as has been discussed. We are expelling individuals based on Title 42, specifically because of COVID, because we want to prevent a scenario where large numbers of people are gathering and posing a threat to the community and also to the migrants themselves. Those are the policies we put in place in large part because, again, the CDC continues to recommend Title 42 be in place given we’re facing a global pandemic.

For some reason, Doocy seems to think that undocumented migrants should be processed the same as people arriving on international flights with passports. Is he really unaware that some refugees might be traveling without papers or visas or even vaccination cards? They need to be processed differently due to their unique circumstances. But Doocy’s question implies that the circumstances are the same and so the procedures should be as well.

Psaki’s patience with inane questions like these is commendable. But when they come from the same person so frequently and predictably, you would think there would be a limit. Some of Doocy’s prior exchanges include the time he tried to conflate processes involving American employees with those involving immigrants. Or the time he failed to grasp that a pandemic is a moving target that requires constant reassessment. Or the time he tried to combine completely unrelated pandemic issues into one issue that he can exploit. And those are just the questions related to COVID.

It’s troubling that these questions have to be tolerated in a briefing room full of actual journalists who have substantive questions. The time wasted on Doocy is depriving the American people of answers to questions that will actually impact their lives. But this is one of the costs of having a free press wherein the Doocys of the world get their fifteen minutes of dumbassery.

For some unfathomable reason, much of the mainstream media has an uncontrollable fixation on the muddled mindset of Donald Trump’s Legion of Losers. Despite being a shrinking minority of the populace who have set aside all semblance of reason, the press feels compelled to get their opinions about the current political landscape that they obviously can’t comprehend. 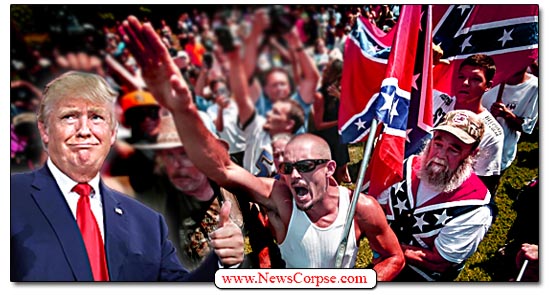 On Monday morning CBS News dispatched Ted Koppel to Mt. Airy, North Carolina, to engage the passengers on a Magical Mystery Tour of sorts. Their tour bus was headed for the fictional inspiration for “The Andy Griffith Show,” Mayberry, NC, where the sheriff, Andy Taylor, refused to carry a gun. And what could be a better metaphor for country hicks who believe in fantastical fairy tales, whether told by classic TV characters or crackpot conspiracy theorists?

This compulsion to explore the bitter psyches of voters whose candidate was decisively defeated by Joe Biden has precisely zero news value. And it is notable that there is almost never an effort to balance the record by interviewing Biden voters at a backwoods Waffle House who comprise the electoral majority. The press only seems to care about the Trumpian yokel worldview. Which led to this enlightening discussion (video below):

Koppel: Tell me what you think happened on January 6th at Congress.
Trumper 1: They showed truckloads of people that they were bringing in for this. It was all staged. And that’s how that happened. They even showed pictures of it from the news about these vehicles coming in with all these BLM [Black Lives Matter] people.
Trumper 2: We don’t even watch news on TV anymore. We don’t feel like that we are being told the truth. And we find our truth in other ways. And I won’t say what those other ways are, but I feel like we aren’t being told the truth because we’re trying to be swayed in a direction that we know is not the right direction.

It is frightening and sad that there are still delusional Trump cultists who believe that the January 6th insurrection was staged by radical lefties outfitted with Trump flags and fashion. That’s when they aren’t claiming that there was no insurrection at all and that the whole affair was peaceful. Trump himself said that “It was zero threat, right from the start… Some of them went in, and they are hugging and kissing the police.”

And never mind that scared Republicans in Congress, including the GOP minority leader Kevin McCarthy, were pleading with Trump to call off his brigades while the riots were still in progress. And forget about all the rioters who have bragged about their Capitol invasion adventure.

The “truckloads of people” brought in were not BLM moles. And the Trumpers never saw that on TV. We know that in part because it didn’t happen, and in part because they admitted that “We don’t even watch news on TV anymore.” And it’s cute that they claim to have “other ways” to find truth, but that they won’t say what they are.

The Trumpists can’t seem to decide whether the insurrection occurred, or was just a love-in, or was a righteous protest, or was – according to Tucker Carlson – orchestrated by the FBI. In the meantime, Koppel’s bus blather continued…

Koppel: When President Trump talked about the press being the enemy of the people…
Trumpers: They are. I love President Trump. I love that man. I do.
Trumper 3: I just hope that when this airs it won’t show Southerners as a bunch of dumb idiots like so many parts of the country do. We have a lot of love in our hearts. We love our country. We love our follow man. And if the rest of the country felt like that, it would be a better place.

So the answer to the question about whether the press is the enemy of the people is that they love Donald Trump. And after that utterly inane comment they worry about being perceived as “a bunch of dumb idiots.” Well, if that ship hadn’t sailed before, she just cast it off.

What’s more, if they want people to believe that they have Love in their hearts, they probably shouldn’t be accusing Black Americans of being violent provocateurs, or calling journalists enemies of the people, or defending Trump’s lies and disinformation that is dividing the nation and undermining democracy. Those are hardly expressions of either love or patriotism.

Mt. Airy, NC is the inspiration for Mayberry in "The Andy Griffth Show." Hundreds of thousands of visitors come each year in search of the fictional town. In this Sunspot, Ted Koppel speaks with some about their views of Washington. pic.twitter.com/Hkir4cRkuI