The stench of desperation is wafting through Mar-a-Lago as Donald Trump slides deeper into the sewer of his own lies and psychoses. Even as the news breaks that he knew early on that there were no significant irregularities in the 2020 presidential election, he is continuing to disgorge increasingly bizarre and repeatedly debunked claims of fraud. 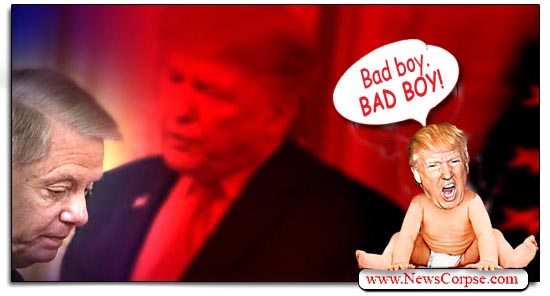 On Thursday morning Trump released another statement via his spokes-shill, Liz Harrington (whose proxy Trump tweeting is violating Twitter’s rules against circumventing a ban). Like most of his Twitter tantrums (twantrums?), this one was drenched with malice toward whoever he presently deemed worthy of his persecution and punishment. But this time the punishee was among his most loyal and shameless sycophants, Lindsey Graham.

Trump got wind of some of the excerpts from the new book, Peril, by Bob Woodward and Robert Costa. He surely didn’t read it, but the press has been quoting some of the more scandalous passages. One of them involved an account of how Republican senators Lindsey Graham and Mike Lee reacted to to Trump’s obsession with having lost the election to Joe Biden. As reported by the Washington Post…

“The book, ‘Peril,’ describes parallel efforts by the South Carolina Republican [Graham] and his conservative colleague from Utah, Sen. Mike Lee, to personally investigate the president’s claims of voter fraud as the lawmakers prepared to certify Joe Biden’s victory on Jan. 6.

Graham and Lee, both of whom ultimately voted to certify the results, took the claims of election fraud seriously enough to get briefed on the details, involve their senior staff and call state officials throughout the country. But privately, Graham gave the arguments a withering assessment, according to the book, saying they were suitable for ‘third grade.'”

And that was all it took to trigger Trump’s tempestuous wrath. This isn’t even an issue with Graham speaking out of turn on Fox News. It’s an account from a book that Trump hasn’t read, but would ordinarily dismiss as “fake” news. The tediously long tirade he released rebutting this was rife with seething animosity toward Graham, despite the Senator’s wretched record of Trump-fluffing fealty to the Former Guy:

“I spent virtually no time with Senators Mike Lee of Utah, or Lindsey Graham of South Carolina, talking about the 2020 Presidential Election Scam or, as it is viewed by many, the ‘Crime of the Century.’ Lindsey and Mike should be ashamed of themselves for not putting up the fight necessary to win. […]

“Mike Lee, Lindsey Graham, and all of the other Republicans who were unwilling to fight for the Presidency … are letting the Democrats get away with the greatest Election Hoax in history—a total con job! […] They should be ashamed of themselves.”

Most of the rest of Trump’s harangue was dedicated to his “Big Lie” that the election was “rigged” and “stolen” from him. He insists that the evidence of fraud is “staggering” (a word that he also used in another tweet Monday) despite the inability of him or his legal flunkies (whose licenses are being suspended) being able to provide any of it in more than 60 court cases that they lost. Nevertheless, Trump whines…

“Look at the facts that are coming out in AZ, GA, MI, PA, WI, and other States. If this were Schumer and the Democrats, with the evidence we have of Election Fraud (especially newly revealed evidence), they would have never voted to approve Biden as President. […]

“We are losing our Country! The Democrats are vicious and fight like hell, and the Republicans do nothing about it. RINOs fight harder against Republicans than they do against Democrats. […] The evidence on determinative and wide-ranging Election Fraud is staggering. Your Republican Presidential candidate won in a landslide, but has so little backing from Republican ‘leadership.'”

Trump also complained about the Republicans being politically negligent, asking “Why don’t they have hearings [where] we would all hear the irrefutable facts!” Who wants to tell him that in Congress the minority party doesn’t control the hearings schedule? However, nothing is stopping him from holding a press conference or a MyPillow-style symposium to make the “irrefutable facts” public. He could even produce his “staggering” evidence at one of his cult rallies. So is Trump just another RINO failing to expose the Democrats who “are destroying our Country”?

Trump’s assault on Graham marks another milestone in his mental meltdown. After all, Graham is the guy who insisted that “the Republican Party can’t grow” without Trump. He also said that he wants to “harness the magic” of Trump’s “movement,” while ignoring his “dark side.” And he has pledged to “go to war for the principles Chick fil-A stands for.” But even all of that isn’t worshipful enough for Trump. And his dimwitted devotees still haven’t figured that out.