It’s that time of year again. It’s time for the “Met Gala,” an annual charity event held at the Metropolitan Museum of Art in New York City. The event is known for inspiring attendees to adorn themselves in unique, and often bizarre, costumes that frequently create a stir on the red carpet. 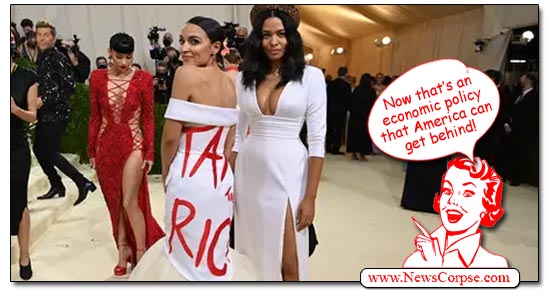 This year the gala was graced with the presence of the representative for New York’s 14th congressional district, Alexandria Ocasio-Cortez. And she arrived in an outfit that is as much a political statement as it is a fashion statement: Tax the Rich!

AOC at the #MetGala  in a dress that reads “Tax The Rich.” pic.twitter.com/U26ZQb2Loi

This should give Fox News something to talk about for the rest of the month, at least.

RELATED: Big Baby Trump Says AOC has ‘the Mind of a Child’

On the solemn anniversary of the 9/11 terrorist attacks, four presidents (Clinton, Bush, Obama, and Biden) made dignified and respectful appearances to honor the victims, heroes, and families whose lives were changed forever. These statesmen demonstrated the compassion and decency to set aside their personal interests in order to remind the nation what it means to be the “United” States of America.

The only holdout was, of course, Donald Trump, who had a more pressing engagement to enrich himself as a commentator at an exhibition fight in Hollywood, Florida. He did put out a video that was typically dominated by tributes to himself and bitter assaults on his political foes.

On Monday morning Fox News covered some of the weekend events from a thoroughly bizarre and repugnant perspective. The segment somehow veered off into territory that had nothing to do with 9/11 (video below). At one point, co-host Rachel Campos-Duffy felt compelled to say that…

“We had a stand down on white supremacy in the military, and I guess that I’m just not seeing that that’s worthy of a stand down.”

Really? So Campos-Duffy is in favor of the military permitting white supremacy in the ranks? While it isn’t particularly noteworthy that she and others on Fox News would hold that opinion (her co-host Brian Kilmeade agreed saying that “I share your frustration”), it isn’t often that they state it so explicitly on the air.

What triggered this outburst was a discussion about remarks by George W. Bush on Saturday. In a surprisingly thoughtful address, Bush drew parallels between foreign terrorists and the homegrown variety that have been inspired by Trump and Fox News. Bush said that…

“We have seen growing evidence that the dangers to our country can come not only across borders, but from violence that gathers within. There is little cultural overlap between violent extremists abroad and violent extremists at home. But in their disdain for pluralism, in their disregard for human life, in their determination to defile national symbols, they are children of the same foul spirit.”

Campos-Duffy complained that Bush’s comments took “the focus off of who we need to be focused on.” She elaborated saying that…

“I think that motivations matter. The Islamic terrorists want to kill Americans. They hate Western civilization. They hate America. They have lots of reason for that. Regardless of what you think about what happened on Jan. 6, the people there went in with the flags. They were not America haters.”

What distinction is she making here? The motives of the Trump insurrectionists were also that they wanted to kill Americans, including Mike Pence, Nancy Pelosi, and other members of Congress. They hate Western civilization and America, as evident in their efforts to discard the Constitution and impose their own totalitarian dictatorship. Yes, they went there with flags, which they used as weapons against the police officers who were protecting the seat of American democracy. How were they not “America haters”? And Trump himself weighed in on Bush’s speech saying that…

“…he lectures us that terrorists on the ‘right’ are a bigger problem than those from foreign countries that hate America and that are pouring into our Country right now.”

Notice that Bush said nothing about the “right” or any other political ideology, but Trump recognized his own faction when he heard it described. And his assertion that foreign terrorists are “pouring into our Country right now” is just more of his delusional hyperbole. Just like his “Big Lie” about election fraud, there is no factual basis for his charges. Trump just wants to drench his cult followers in irrational fears.

Furthermore, Trump is whining (as usual) that Bush has no right to “lecture” anyone because he is responsible for thousands of deaths from the Afghanistan and Iraq wars. That may be true. But there is a nauseating sort of irony in Trump saying it considering that he is responsible for hundreds of thousands of American deaths from his negligent and incompetent mismanagement of the COVID pandemic.

In the attempt by Fox News to distinguish the crimes of the January 6th insurrectionists, and other domestic terrorists, from foreign terrorists, they actually highlighted their similarities and common purpose. And even worse, they overtly expressed their not-so-veiled racism. This isn’t new for Fox, but it nevertheless needs to be exposed and disseminated widely to remind everyone what sort of vile propaganda network the Murdochs are operating.