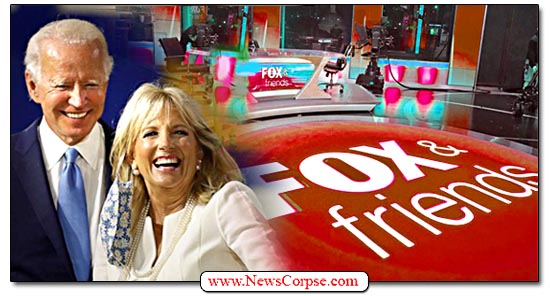 Fox News has spent the past year and a half promoting their recklessly pro-COVID, anti-vax agenda. It’s an editorial mission that steered their dimwitted viewers away from the simple, life-saving steps that would protect themselves and others. Consequently, the deadly coronavirus pandemic can now be accurately attributed to the “Fox News Variant” that is infecting and killing mostly Republicans and Trump cult followers at record levels.

Fox News hosts and guests are staunchly devoted to spreading disinformation about COVID. However, no one is more guilty of the medical massacre in America today than Fox’s Chief Conspiracy Crackpot, Tucker Carlson. He has promoted the use of quack cures, espoused schizoid conspiracy theories that the vaccines don’t work, and even prodded his viewers to make false police reports of child abuse against parents whose children wear face masks.

On Monday evening Carlson took another step off the cliff of incoherence with a diatribe aimed at building more obstacles to the nation finally recovering from the COVID pandemic. In this episode, Carlson unleashed some bizarre accusations about the intentions of President Biden’s Defense Department mandating coronavirus vaccines for service members. Carlson ranted that…

“The point of mandatory vaccinations is to identify the sincere Christians in the ranks, the freethinkers, the men with high testosterone levels, and anyone else who does not love Joe Biden, and make them leave immediately. It’s a takeover of the U.S. military.

Tucker Carlson: "The point of mandatory vaccinations to identify the sincere Christians in the ranks, the freethinkers, the men with high testosterone levels, and anybody else who doesn’t love Joe Biden and make them leave immediately. It’s a takeover of the U.S. military!" pic.twitter.com/omOMx1fJet

Seriously? Does Carlson actually believe that directing the military to get vaccinated against a virus that has already killed more than 675,000 Americans is a ‘takeover of the military’ by wimpy, Biden-loving, atheists? Does he also think it’s unmanly for soldiers to wear combat helmets? Are Air Force pilots cowards if they use parachutes? That gear, like vaccines, is intended to protect people from known hazards. But in Carlson’s world it is an attack on his holy Christianism and a show of weakness and/or impotence, which Carlson probably thinks is caused by the vaccines.

Carlson’s harangue is off-handedly referring to a faction of phony anti-vaxxers who are pretending to have a religious objection to getting vaccinated. But even far right evangelicals like Robert Jeffress aren’t buying it. Carlson also claimed that there was no need for a vaccine mandate because “Only 46 members of the entire U.S. military have died from the coronavirus over the last year and a half.” And, in Carlson’s view, they were expendable.

However, It should be noted that if Carlson had included the fatalities of military family members, civilian employees, and contractors, there were 473 deaths. Something that Carlson clearly fails to understand is that the wellbeing of the whole military community is critical to America’s defense readiness. While some soldiers are threatening to leave rather than get vaccinated, the prospect of many more becoming sick or dying would be much worse. But that’s only a part of the relevant context that Carlson left out.

First of all, Carlson failed to note that COVID deaths in the military have been increasing in the latest surge. The Military Times reported that “Eight total deaths in the past three weeks adds up to twice the previous monthly high” And the death rate is “25 times higher than it was last year.”

What’s more, according to Defense Department data, the reason for the relatively lower death rates is the high rate of vaccination in the ranks. 89% of soldiers in the Army have had at least one dose of the vaccine, The Marines are at 68%. the Navy is at 90%. And the Air Force is at 99%. That’s an average total of 89% of all service members vaccinated. If Carlson is pleased that there is a lower death rate in the military than the population at large, then if he were honest (yeah, right) he would have to admit that it’s because vaccines work.

So in the end, Carlson’s panic over apocryphal assaults on Christianity, free thinking, and machismo, are, as usual, figments of his perverse imagination. But it fits perfectly into his long-established pattern of fantastical fear mongering and aversion to the responsibility and compassion that decent humans display. And everyone at Fox News, particularly the Murdoch family that runs it, is complicit in the harm that is being done by Carlson and his confederates at Fox to the nation and the world.