For over six years Fox News has served as the de facto Ministry of Disinformation for Donald Trump during both his campaigns and his presidency. Their programs featured shameless cheerleaders for Trump, including Sean Hannity, Tucker Carlson, Laura Ingraham, Jesse Watters, the “curvy couch” potatoes of Fox and Friends, and more. 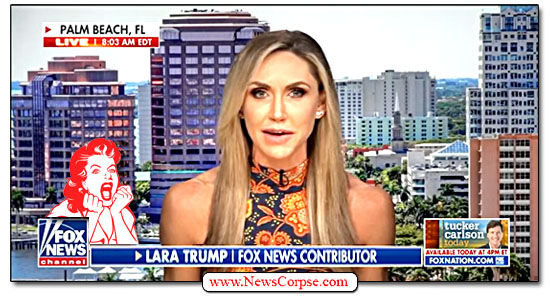 Fox’s slavish fawning extended to Trump’s smarmy incarnation of the Republican Party. And they hired many of his administration’s alumni following his eviction from the White House, including his former Secretary of State, Mike Pompeo, his economic advisor, Larry Kudlow, and his press secretary, Kayleigh McEnany. However, no recruit was more brazenly biased than the wife of Trump spawn Eric, Lara Trump.

Well, as of Friday, Lara is no longer a paid Fox News contributor. According to Variety…

“Fox News has long maintained a policy that prohibits people from being contributors when they announce a campaign for public office. In this case, since Donald Trump has announced his intention to run once again for president, the network’s rules bar Lara Trump from being paid for her commentary. She could conceivably appear on the air in an unpaid capacity, as she did when Donald Trump ran during the 2020 campaign.”

It took fox News three weeks to muster the courage to dump Trump’s daughter-in-law after the Former Guy’s announcement. But rest assured that she will continue to be welcomed as a guest by the likes of Hannity. What’s more, if Fox News were to take their own policies seriously, Hannity and his Trump-fluffing comrades would be fired as well for openly campaigning for Trump and other Republicans.

In tribute to Lara Trump’s expert, informed, and unbiased contributions (okay, stop laughing now) to the political zeitgeist during her twenty month tenure at Fox News, here is a brief collection of her most memorable moments…

Lara Trump Joins Fox News Just in Time to Boost Her Campaign for the Senate
On her welcome to the family: “I’m so so excited, first of all, to be joining the Fox family. I sort of feel like I’ve been an unofficial member of the team for so long.”

Fox News Vigilantes, Lara Trump and ‘Judge’ Pirro, Issue Call to ‘Arm Up’ to Shoot Migrants
On her advocacy of vigilantes shooting refugees: “I don’t know what to tell people that live on the Southern border. I guess they better arm up and get guns and be ready, and maybe they’re gonna have to start taking matters into their own hands.”

Lara Trump’s Fox News Fantastical Fact-Free Revisionist History: Trump vs Biden: The First Year
On her ability to forget Trump’s frequent golf holidays and profiteering from gauging his hotel guests, including the Secret Service and foreign officials: “I’m old enough to remember when we had a president who worked all day everyday for the American people, and by the way, took no salary.”

Fox News Spews Knee-Jerk Defense of Wannabe Dictator Trump After FBI Search of Mar-a-Lago
On her pretending that Trump didn’t steal classified documents, he was just an avid scrapbooker: “[He] loves to save things like newspaper clippings, magazine clippings, photographs.”

Lara Trump Admits on Fox News that Her Sugardaddy-In-Law Interfered with Justice Dept Business
On her confession that Trump disregarded the independence of the Justice Department so she thinks everyone does: “It’s ridiculous to assume the current president did not know about an FBI raid from his own Department of Justice on the last president and a person that he may be running against in the upcoming 2024 election. What an outrageous statement from Joe Biden. I don’t think anyone believes that. And if you do believe that, then who is in charge of the White House? Who is making these calls? It is very concerning on all fronts and completely insane.”

That’s quite a legacy of lunacy. Look for it to continue as Trump embarks on his campaign to lose the popular vote for a third time, and to repulse the majority of Americans with his noxious ranting and anti-American tirades…