The Trump Republican Party is beginning the new year just as one would have expected: With the division, animosity, and chaotic incompetence that has been the hallmark of Donald Trump’s brief and abhorrent political career. 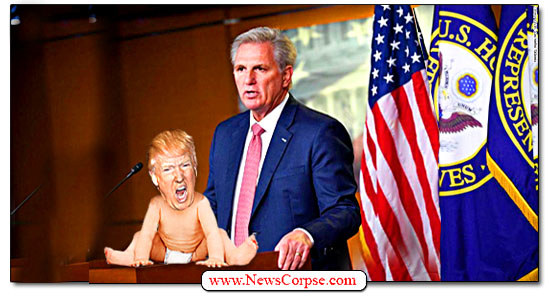 The election of the House Speaker is ordinarily a routine procedure that places the majority party’s leader in the Speaker’s chair. That isn’t happening this year because the GOP’s so-called “Freedom” Caucus is opposed to promoting Kevin McCarthy to that position without his agreement to essentially bow to their supremacy. That’s how McCarthy got the vote of Marjorie Taylor Greene, but he doesn’t have enough goodies to dispense in order to bribe the rest of his fellow Republican foes.

RELATED: Marjorie Taylor Greene: The GOP Will Govern Like the Mafia’s 5 Families in ‘The Godfather’

While McCarthy is fighting for his political life, his lord and savior, Donald Trump, is allowing him to sink into obscurity and the shame of failure. Never mind that Trump had previously endorsed McCarthy for speaker. He told Breitbart “News” that “Kevin has worked very hard. I think he deserves the shot.” And that “Hopefully he’s going to be very strong and going to be very good and he’s going to do what everybody wants.” Really? Everybody? Trump went on to make a direct appeal to his GOP pawns, saying that…

“I’m friendly with a lot of those people who are against Kevin. I think almost every one of them are very much inclined toward Trump, and me toward them. But I have to tell them, and I have told them, you’re playing a very dangerous game. […] It could be a doomsday scenario.”

This is another example just how impotent Trump has become as the reputed Republican leader and supposed kingmaker. He can’t even get his most ardent followers in Congress to back his candidate for this critical position. But then again, he isn’t really trying. In fact, Trump hasn’t even mentioned the Speaker’s vote at all in the days and hours prior to it.

Instead, Trump has been posting bizarre comments and ludicrous videos on his floundering Twitter ripoff, Truth Social, about his foremost obsession, the 2020 presidential election that he lost, and his deranged and baseless insistence that there was election fraud. Everything he posted were old and already debunked conspiracy theories.

Sadly, Trump’s morning rant was also focused on defamatory allegations against innocent persons whose lives have been disrupted by his lies. Ruby Freeman, a Georgia poll worker, was mentioned by name as Trump raged “Wow! Has anyone seen the Ruby Freeman ‘contradictions’ of her sworn testimony?” Of course, no one has seen them because they don’t exist. But that didn’t deter Trump from disgorging his outrage in a manner that only affirms his schizoid deterioration, saying that…

“What will the Great State of Georgia do with the Ruby Freeman MESS? Why not just tell the TRUTH, get rid of the turmoil and guilt, and take our Country back from the evils and treachery of the Radical Left monsters who want to see America die? MAKE AMERICA GREAT AGAIN!”

Seriously? The “evils and treachery of the Radical Left monsters who want to see America die?” Does Trump think he’s a character in “The Game of Thrones”? Is he so far removed from reality that he believes this hyperbolized hogwash? Trump is taking his delusions straight down into the trenches of the worst of QAnon idiocy.

Unfortunately, there are still a few blockheaded cult followers who are willing to ride that train right off the tracks and into the Sea of Psychotica. And Trump clearly thinks that this crackpot crusade is more important than who leads his party in the House of Representatives. Or perhaps he just knows that no one is listening to him anymore and is hunkering down in the bunker of his narcissistic neurosis. Either way, he’s a portrait of a pathetic loser who thinks he’s a messiah.

RELATED: The Party of Trump and QAnon: Republicans Worship an Impotent Loser

UPDATE: McCarthy failed to get enough votes to become Speaker on three attempts, after which the House adjourned. However, Trump finally made some remarks about Republicans in Congress. But he wasn’t particularly helpful. He posted that…

“There is so much unnecessary turmoil in the Republican Party, in large part do to people like the Old Broken Crow, Mitch McConnell, his ‘wife’, Coco Chow, who is a sellout to China, and their RINO allies, who make it difficult for everyone else by constantly capitulating to Hopeless Joe Biden and the Democrats. The 1.7 Trillion Dollar Green New Deal ‘booster’ that McConnell and the RINOS handed to the Dems last week was a real downer and embarrassment to Republicans!”

First of all, Trump still didn’t stand up for McCarthy or ask people to vote for him. Secondly, he insulted Mitch McConnell and flung a racist slur at his “wife” (which was curiously in quotes as if he doesn’t really believe they’re married). Third, he took some incoherent swipes at President Biden, who can hardly be called “Hopeless” if he keeps beating Trump and the GOP. And lastly, Trump is too far gone to recognize that he is the biggest “embarrassment to Republicans.” This really couldn’t be more fun, or a better way to start the new year.