The new Republican majority in the House of Representatives is proving to be just as radically right-wing as feared. And true to form, it also unabashedly hypocritical. Both of those characteristics are evident in the Party’s impaneling of a comically named Select Committee on the Weaponization of the Federal Government. 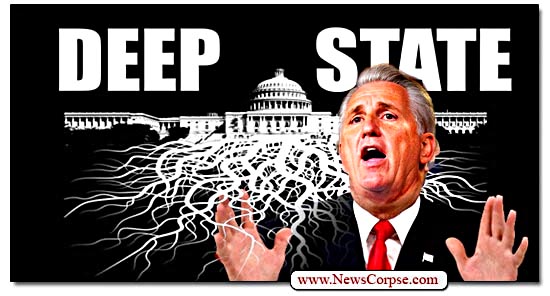 Expect this purely partisan committee to focus on bogus and pre-debunked issues like Hunter Biden’s stolen laptop and the FBI rigging the 2020 presidential election. A better name for the panel would be the Select Committee on Deep State Conspiracy Theories. Expect them also to ignore all of Trump’s vast array of crimes.

Democrats are preparing for the onslaught of asininity that will emerge from the Committee. As reported by ABC News, Rep. Jerry Nadler addressed the matter saying that…

“Jim Jordan and Kevin McCarthy claim to be investigating the weaponization of the federal government when, in fact, this new select committee is the weapon itself,” New York Rep. Jerry Nadler, the top Democrat on the Judiciary Committee, said in a statement. “It is specifically designed to inject extremist politics into our justice system and shield the MAGA movement from the legal consequences of their actions.”

On Thursday morning House Squeaker Kevin McCarthy held a press conference wherein he was asked about the committee and how it would handle certain situations that were made more dicey due to the flagrantly dishonest and legally dubious behavior of Republicans in recent days (years). At one point a reporter posed an especially pertinent question…

Question: Are you concerned that the targets of potential subpoenas will use the argument that you used and Mr. Jordan used to ignore the subpoena you got, that this is just political?
McCarthy: No, because mine wasn’t ignoring the subpoena. I said I would gladly go if we got to appoint people to the committee. The thing was not political. You will find the fundamental difference of me being the speaker and Nancy Pelosi, the other side will get to name their members on the committee. It won’t be hand picked by me and denying the Democrats their voice. So whatever transpires out of the committee is with the Republicans and Democrats as we move forward.

Question: Are you concerned that the targets of potential subpoenas will use the argument that you used and Mr. Jordan used to ignore the subpoena you got, that this is just political? pic.twitter.com/q0xFEhHGPq

The question that McCarthy so poorly evaded answering makes the excellent point that subpoenas issued by Republicans such as Jim Jordan, who themselves failed to appear when they were subpoenaed, are inherently invalid. Why should anyone respect their summonses when they were so brazenly disrespectful under far more credible circumstances?

What’s more, McCarthy’s excuse involves his complaint that Nancy Pelosi didn’t allow McCarthy to appoint Republicans to the Select Committee investigating the January 6th insurrection. Which is false. She only rejected two members (Jim Jordan and Jim Banks) because they were potentially witnesses, or even offenders, themselves. It was McCarthy who then withdrew all Republicans from the panel and refused to appoint any at all.

In addition to that, McCarthy is now saying that he, allegedly unlike Pelosi, is going to allow Democrats to assign their own members to the committee. However, he seems to be forgetting that he recently promised to remove Representatives Adam Schiff, Eric Swalwell, and Ilhan Omar, from any committees that they currently serve on. And unlike Pelosi, he has no good reason to do so.

Democrats are being given six seats on the “Deep State” committee, versus nine for Republicans. So the new Democratic Leader, Hakeem Jeffries, should make three of those appointments Adam Schiff, Eric Swalwell, and Ilhan Omar, and see how McCarthy responds. Odds are heavily in favor of him refusing to seat them. Because hypocrisy, unfairness, and rank partisanship are built in to the Republican code of ethics, or lack thereof.

RELATED: House Squeaker Kevin McCarthy Thanks Donald Trump for Being ‘All In’ on Making Him Speaker