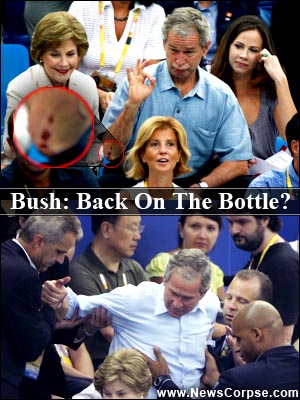 The national embarrassment that is our president once again raises its reddened face. In photographs from the Olympics in China, it appears that recovering souse, George W. Bush, is relapsing.

In one picture his face is flushed, his eyes droop, and his expression is dopey. In all fairness, that may be his normal expression. However, the bloody scrape on his arm suggests that he has recently taken a less than normal fall.

In the other picture, Bush appears to be having trouble remaining upright without considerable help. It takes three men to prop up the wobbly boozer-in-chief.

Don’t it make ya feel proud?

This is the man that John McCain’s 3rd term would seek to emulate if, Heaven forbid, he gets the chance. However, this is not the first evidence of Bush’s backsliding. First and foremost, that high bar of American journalism, the National Enquirer, wrote about it three years ago.

EOnline reported last year that Bush’s return to drinking drove Laura to move out of the White House and to a possible split-up. Other rumors had her house hunting in Dallas for a post-presidency home away from George.

Both the Globe and Examiner covered Laura’s “eruption” at her hubby’s imbibing.

Just last month Bush accused Wall Street of getting drunk and having a hangover. Perhaps they were binging together. We know how close they are.

This is a president who can’t stay upright on a bicycle and who nearly chokes to death on pretzels. Maybe we’ll get a better picture of the man when Oliver Stone’s movie “W” is released in a couple of months. Stone’s script reportedly has Bush Sr. telling his no-good progeny that… 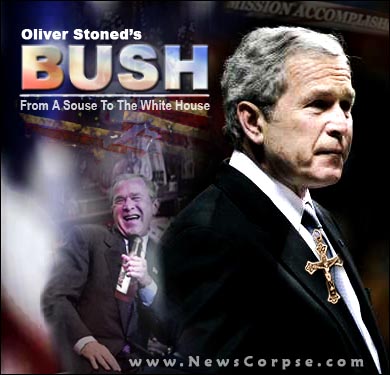 He deeply disappoints us all. This is what America gets when they vote for the guy they’d most like to have a beer with.