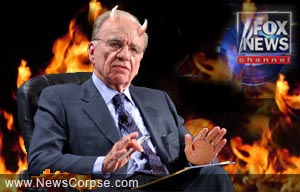 The Independent is reporting that Rupert Murdoch’s News Corp is under investigation as a “corporate suspect” over the charges that the company engaged in unlawful activities including bribery and hacking the phones, email, and computers of hundreds of politicians, celebrities and private citizens, including a missing schoolgirl who later turned up dead. The inquiry could have significant consequences for News Corp around the world including here in the U.S.

“The Independent has learnt the Metropolitan Police has opened an “active investigation” into the corporate liabilities of the UK newspaper group – recently rebranded News UK – which could have serious implications for the ability of its parent company News Corp to operate in the United States.”

That is not merely the opinion of the investigators and/or reporters. News Corp responded to the inquiry with an apocalyptic warning suggesting that thousands of innocents would suffer if the company were held responsible for its criminal behavior.

“A News Corp analysis of the effects of a corporate charge, produced in New York, said the consequences could ‘kill the corporation and 46,000 jobs would be in jeopardy’.

“Lawyers for the media behemoth have pleaded with the Met[tropolitan Police] and the Crown Prosecution Service not to prosecute the company as it would not be in the ‘public interest’ to put thousands of jobs at risk.”

This attempt to turn employees into human shields notwithstanding, it would be unconscionable for the legal authorities to dismiss crimes because of potential adverse business results asserted by the criminal. That’s kind of like a bank president found guilty of embezzlement asking that his charges be dropped because the bad publicity might hurt the bank.

What’s more, there need not be a single job placed in jeopardy if the corporate offenders were brought to justice, removed from the company, and a properly instituted board of directors (e.g. one not beholden to the Murdoch regime) reformed the management and operations of the enterprise.

News Corp is, and has been, a criminal organization for many years. They are unapologetic about their abuse of the law and the public trust. It is encouraging that the British legal system is pursuing these charges, although in the past they have caved in to pressure from powerful business interests and retreated from doing the right thing. Time will tell if they have the integrity and fortitude to follow through on this matter.

As an addendum, the Independent’s article included an interesting explanation of the U.K.’s legal procedures regarding corporate suspects:

The Crown Prosecution Service can treat a company as a “legal person” who is “capable of being prosecuted”.

Any organisation at the centre of a criminal investigation “should not be treated differently from an individual because of its artificial personality”, according to the CPS.

The latest guidelines state: “A thorough enforcement of the criminal law against corporate offenders, where appropriate, will have a deterrent effect, protect the public and support ethical business practices.

“Prosecuting corporations, where appropriate, will capture the full range of criminality involved and thus lead to increased public confidence in the criminal justice system.”

The U.S. would do well to emulate this, particularly in the wake of the abhorrent Supreme Court decisions defining corporations as persons, but not providing any of the legal accountability to which actual persons are subjected.