That’s right. News Corpse was banned as an “Unacceptable Domain” by the martinets of virtue at Reddit.

[Update: After a prolonged dialogue, News Corpse was reinstated, it’s honor restored, and you can now visit the previously expunged post]

[Update II: I spoke too soon. Another moderator has intervened to say that my website will continue to be banned even though he can’t articulate a coherent reason why. So on it goes.] 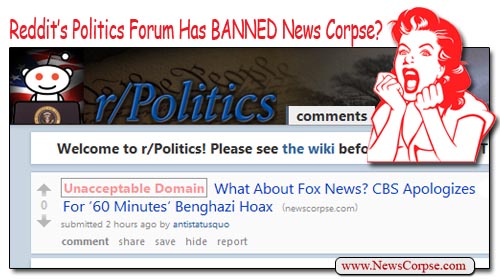 For the past few weeks there has been a raging battle on the Reddit forum for politics. Known as a “subreddit” (or sub) the Politics section was created to be a venue for discussion, debate, and the exchange of information. Unfortunately, recent decisions by the moderators resulted in a venue where that exchange has become something less than free.

The problems began when the moderators revised a list of banned sites (now relocated here) that would be automatically removed from the politics sub. The list contains numerous news sites that are recognized as major contributors to the political discourse, including Alternet, The Heritage Foundation, Media Matters, Mother Jones, National Review, Reason, Salon, and ThinkProgress. [Mother Jones has since been reinstated]. The new policy was quickly denounced by the community at large who reamed the moderators as censors, McCarthyites, and myriad other displays of verbal waterboarding.

At first the moderators defended their actions as necessary to curb the alleged plague of what they called “blogspam,” “sensationalism,” or “bad journalism.” Obviously, it is impossible to fairly adjudicate most of these subjective principles without violating standards of free expression. The fact that respected journalists like the award-winning reporters at Mother Jones made the list is evidence of the foolishness of such lists. A politics discussion forum is supposed to be unfettered and open to broad-based opinions. By slapping blanket bans on the domains of credible media sites, the moderators exposed themselves to the criticisms and insults that, in many cases, they thoroughly deserved.

After a couple of weeks of torment, the moderators took a step back and reconsidered their new policy. They apologized for acting too swiftly, but not for the actual sin of imposing the bans. The community was not mollified by this tepid response and continued to hammer away at the moderators. The mods position at this point is that they will review the sites that were banned and reverse any that they deem to have been banned inappropriately. However, that reeks of putting random people in prison and then promising to arrange future trials whereby they may eventually earn their release. And it still leaves a handful of moderators in charge of the content to which some three million readers will have access.

Which brings us to the subject of this article. This morning a Reddit user named antistatusquo submitted an article from News Corpse. The submission was immediately removed and tagged as an “Unacceptable Domain.” When I noticed this I sent a message to the moderators to inquire as to why my domain was suddenly regarded as unacceptable. I was not on the banned list and never had been. The first response I got was from a new moderator who speculated that my Scarlet Letter was due to the fact that another website, Americans Against the Tea Party, which for some unexplained reason is on the banned list, has shared some of my articles on their Facebook page. What that has to do with my status on Reddit is a mystery, and it reveals a disturbingly ignorant grasp of social media. It also smacks of a sort of perverse guilt-by-association. What’s next, will they ask me to name names?

Later, a more experienced moderator responded who said that the removal of “my” post was simply because the domain was banned. I had to explain that the post that was removed was not mine (it was by antistatusquo), and that, in any case, the domain was not banned (unless they had a secret banned list that was not available to the public). After a few more back-and-forth messages, the mod determined that the whole thing was a mistake. The post was restored and the “unacceptable” tag was removed.

[As noted above, the ban was later reinstated by a different mod. His justification for doing so was an accusation that I had “spammed” on behalf of my website. He sent me his analysis, covering a full year, showing that about 17% of the articles I had submitted were from my website. However, the posted rules explicitly define spamming as “If a user submits to any one domain more than 33% of the time.” So I was at about half of that threshold according to his own numbers. When I pointed this out to the mod he stopped responding to my messages]

The moral of this story is that censorship is not an innocuous act that can be toyed with without producing tangible harm. Once it is invoked it’s effects can spread and multiply. Reddit still has their banned list in place while they claim that they are reviewing the prisoners for possible parole. But in the interim, there are sites like mine that are getting caught up in the net of suppression without justification. Although the problem in my case was eventually resolved, the hours it took to do so resulted in the posting falling below many other subsequent posts so that fewer people would ever see it or have the opportunity to vote on it. [if you would like to visit it now, click here]

Hopefully the Politics sub moderators will quickly conclude that they made a terrible mistake and restore the banned domains and let the community vote on which they think are deserving or not. That is the whole concept behind the Reddit website, and it works brilliantly if the moderators will let it.

6 thoughts on “The Stink Of Censorship: News Corpse BANNED On Reddit/Politics”