Hillary Clinton once said that if President Obama walked on water he would be criticized by Republicans for not being able to swim. Sadly, the point Clinton was making about the knee-jerk hostility of the right does not go nearly far enough. For example, this week the Fox News community website, Fox Nation, took a swipe at Obama’s judicial nominations with an article titled “Obama Seized Control Of ‘Second Highest Court’ In The Nation.” 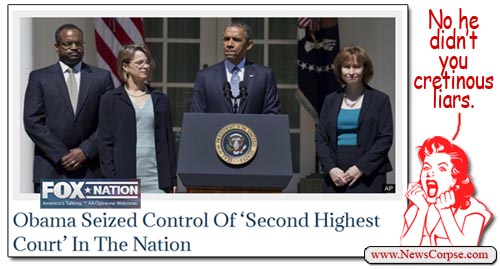 For more than 50 documented examples of blatant lies by Fox Nation,
Read the acclaimed ebook, Fox Nation vs. Reality, available at Amazon.

The Fox Nationalists cribbed this item from the ultra wingnut brigade at Newsmax, who nurtured a conspiracy out of the rather routine process of filling vacancies on federal courts. Writing for Newsmax, John Gizzi said that…

“In November, Obama effectively gained control of the 11-member court when Senate Majority Leader Harry Reid triggered the ‘nuclear option’ — reducing the threshold needed to stop a filibuster from 60 votes to a simple majority.”

Putting this assertion into the context of reality, a state of consciousness that conservatives deliberately avoid, one would first have to recognize that Harry Reid only moved to modify the Senate rules because Republicans had abused them in an unprecedented manner. While filibusters were once employed as a last ditch effort to derail legislation that a member simply could not abide on principle, today’s GOP made it a routine procedure by filibustering virtually everything that came up for a vote. This was particularly egregious when it came to the confirmations of administration appointees and judges. It was a tactic aimed at gutting the authority of the executive branch of government that, for the first time in history, was headed by an African-American.

As a result of the filibuster reform, Obama’s nominees for judicial posts were able to be confirmed by a majority vote in the senate. This is sometimes called “democracy.” Subsequent to confirmation, however, Obama has no control over the decisions by his appointees who are independent and have lifetime tenure. So there is no truth to the assertion that Obama has seized control of anything.

Newsmax went on to quote the rightist Heritage Foundation lawyer, Hans von Spakovsky (a cartoon villain name, if there ever was one), complaining that by filling the court’s vacancies, it would then have a majority of jurists appointed by Democratic presidents. In the view of von Spakovsky that was some sort flaw that artificially prejudiced the judiciary. To the contrary, that is precisely how the Framers intended the system to work. Over time the courts would represent the political diversity of the populace as democratically expressed by their vote for the presidency.

All that Obama has done, with help from the senate, is to carry out his duties as stipulated by the Constitution. It is the president’s responsibility to place nominees before the senate for confirmation when a vacancy is created. There is no reference whatsoever to filibusters in the Constitution. So the charge that is being made that Obama has “seized control” of the courts is unarguably false. But that never stops Fox Nation from publishing such charges. In fact, it probably makes it all the more likely.

2 thoughts on “Fox Nation vs. Reality: Obama ‘Seizes’ Control Of Courts By Following The Constitution”