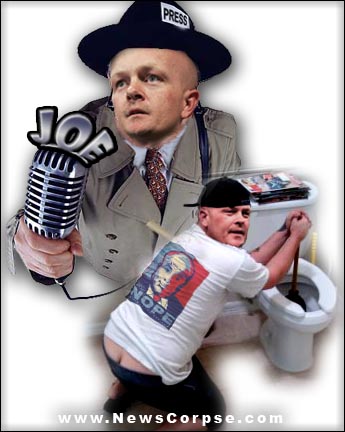 America’s own Renaissance Man, Samuel “Joe the Plumber” Wurzelbacher, has tackled many tasks. He has been an author, a country singer, a digital TV promoter, a tax advisor, a pundit, and a campaign mascot. One of the few things he has not been is a plumber.

Now Joe has found a new peak to scale. He is being sent to Israel as a war correspondent for Pajamas Media (that’s right, Pajamas). We at News Corpse have great confidence that he will be a crack reporter who will wrench the truth from his subjects. Israeli and Hamas officials will be comfortable disclosing sensitive data because – think about it – who knows more about leaks?

It will be a draining assignment, but Joe is surely up to it. After all, he has such a wealth of experience at his disposal to help him flush out any story.

Plumber Joe says that he wants to report from the perspective of the “Average Joe.” And who better to tell that story than a lying tax evader who pals around with failed presidential candidates? Never mind that he knows nothing about the region, or the people, or the conflict in which they are embroiled. He believes that God will protect him in this dangerous mission (except from mortars, so it must be one of those discount Gods), and that it’s a chance to do some good. But he had better do it quickly because he is scheduled to speak at the Pajamas Media Conservative 2.0 Conference at the end of February back in Washington, D.C.

There is little chance that Joe can dredge up anything but embarrassment from this. And while the Pajamas crew was never known for their professionalism or integrity, it’s still a little surprising that they would sink this low. Joe has demonstrated in his previous television appearances that he is no Christiane Amanpour. She would probably laugh in his face and call him a pathetic hack. And what could he do? I guess he could tell her to pipe down, and if that didn’t work he could sewer.

Update: Fox News hosted Mr. Wurzelbacher this morning and extracted the news-making exclusive that Joey the P has quit the plumbing business for good. What will we call him now?

7 thoughts on “Joe The Plumber – Now A Crack Reporter”