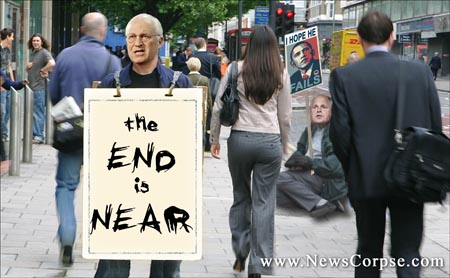 It is now all of two weeks into the administration of Barack Obama, and already the media is heralding the end of the honeymoon. Considering that on the day of the inauguration, Chris Wallace of Fox News suggested that Obama wasn’t actually president at all because of the mis-articulation of Chief Justice Roberts during the oath, I’m not certain that the honeymoon didn’t end before it ever began.

The failure of the Obama presidency should be welcome news to some of his critics. Rush Limbaugh confessed to hoping for such an outcome. That admission created something of a stir, but the result seems to be that Limbaugh has emerged as the new leader of the Republican Party. He has taken his place at the top of the Party’s hierarchy and even allows members of Congress an audience wherein they can profess their allegiance and kiss his ass ring.

Obama recently told a gathering of Congress critters that “You can’t just listen to Rush Limbaugh and get things done.” Obama was criticized by some Democrats because these remarks just serve to elevate Limbaugh by taking him on. I agree with that analysis, but not that it deserves criticism. It can only help Democrats to elevate Limbaugh and make him the logo of the Republican brand.

The rest of the field isn’t much better than Limbaugh. Sarah Palin still pokes her perky head up every few days to keep her name in the news. And Joe the Plumber … er … journalist … er … political strategist just seems to keep finding new ways to embarrass himself and the Party he has come to represent.

GOP alums aren’t helping either. George Bush has moved into Dick Cheney’s secret, undisclosed location and has not been seen or heard since just after Obama’s inauguration (on second thought, maybe that’s how he’s helping). Cheney, on the other hand, has emerged from his lair wearing a sandwich board that says “REPENT! The end is NEAR!”

And, as always, Fox News remains the Public Relations arm of the Republican Party. Glenn Beck has arrived and is settling in comfortably with daily derision directed at Obama and his still forming team. Bill O’Reilly has declared war on the New York Times, presumably because he can’t keep waging his war on Christmas in February – and he must have a war raging at all times. And Chris Wallace, given a brief ten minutes with the President, uses part of it to ask if he is too thin-skinned because he told a joke about Fox News. Obama responded by stating the obvious:

“I think it’s fair to say that I don’t always get my most favorable coverage on Fox, but that’s part of how a democracy is supposed to work. We’re not all supposed to be in lock step here.”

The rightist echo chamber has already seized on these remarks asserting that Obama has insinuated that all of the media, other than Fox News, are in lock-step with the White House. Of course that is not what he said at all, and just watching the various news networks would reveal how shallow that analysis is. What is inescapable is the fact that Fox alone has a lock-step ideology. Despite false claims of liberal bias, other networks have much more diverse programming and personalities. CNN has Lou Dobbs, MSNBC has Joe Scarborough.

Only Fox has a 100% ideologically pure schedule. And it is Fox that is home to the Limbaughs, Palins, Wurzlebachers, Becks, Hannitys, O’Reillys, etc., who, due to the absence of real political leadership, are the new faces of the Republican Party.

One thought on “The New Face Of The Republican Party”