Having already won the coveted “Lie of the Year” award from PolitiFact, it is time that we recognize Sarah Palin for the truly superlative accomplishment of her brief public tenure. It is an achievement for which she has no peer. She has masterfully positioned herself as the undisputed champion in this highly specialized calling.

Congratulations Sarah Palin, for being this year’s most “Pitiful, Sniveling, Coward.”

The path to victory for Palin was characterized by her trademarked apprehension of, and disdain for, the press. Palin’s fear of the media is an all-consuming neurosis. She has exhibited these tendencies beginning with her initial introduction to the national stage. After being tapped by John McCain as his vice-presidential running mate, Palin immediately ducked for cover. 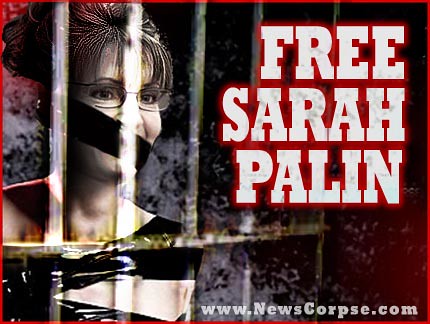 From the earliest days of the campaign, Palin sought the refuge of friendly inquisitors like Sean Hannity and Greta Van Susteren. Needless to say, Fox News had a virtually exclusive relationship with Palin. That was smart strategy on the part of Palin and her handlers with the McCain staff. On the rare occasions that she strayed from the protective cocoon of Fox she was stymied by brain twisters like “What do you read?” Nevertheless, she pretends to have an interest in being accessible. At least that’s what she told Carl Cameron of Fox News:

Palin, 10/3/08: “I look forward to speaking to the media more and more everyday and providing whatever access the media would want. My life is certainly an open book.”

For something she claims to look forward to, she sure did avoid it like the plague. Palin’s fear is palpable. She runs from the press like a Tea Bagger from a library (the Teadiots really hate that “socialist” style distribution of elitist books containing “information”). Throughout the campaign, and to this day more than a year later, Palin has declined to appear on any of the Sunday news programs. Not even Fox News Sunday with Chris Wallace. She has not held a single press conference. And in a fit of uncharacteristic candor, she even admitted that she resigned her governorship to avoid further press scrutiny. Quitting, of course, is just another manifestation of her renowned chicken-heartedness.

So how does a media-phobe like Palin conduct herself in a public sphere that demands access and fresh bones on which to chew? By hiding behind a curtain of social media, an online version of a one-way mirror. Palin tweets and posts updates on her Facebook account as a means to communicate with her legion of fans. The problem is that the press seems to regard this as an appropriate method of interaction and they faithfully regurgitate every keystroke as if it were newsworthy. It isn’t.

The media seems to be oblivious to the absurdity of reporting Palin’s tweets. First of all, they don’t even know if they are from Palin or her ghostwriter. Secondly, there is no opportunity to question her about her comments. These postings are nothing more (and actually something much less) than press releases. Why do newsrooms on television and in print feel the least bit obligated to pass them on? And when they do so, why don’t bother to at least fact-check them?

By cowering behind an Internet firewall, Palin can shoot spitballs at the press and quickly duck back into her shelter. For that she deserves to be the Pitiful, Sniveling, Coward Of The Year. But what award do we give the news media? They present an even bigger problem by letting Palin get away with her cheap shots and cheesy antics. In some respects you can hardly blame Palin. She must know deep down that she’s a woefully unprepared dimwit who was elevated to national prominence by a fluke of political desperation. She has to behave this way now or risk further embarrassment. But the press has no such excuse.

So far this month, Palin has criticized Nancy Pelosi, Eugene Robinson, Arnold Schwarzenegger, Al Gore, and of course, President Obama, from the safety of her Facebook page. This sort of attack plan assures that she is shielded from return fire. It is a sterile battlefield that she controls and from which she need not worry about pesky rebuttals or corrections. She also took a couple of swipes at the press who still, for some reason, obediently yield to her siren’s call.

If the media is to preserve whatever crumbs of credibility they are clinging to, they need to start exhibiting signs of life. They need to start acting like professionals. And that means that they need to ignore Sarah Palin. If Palin will not stand before them and engage in a substantive dialogue, then let her tweet to her followers and enjoy her fame the same way other celebrities like Ashton Kutcher and Lindsay Lohan do. Let her sign books at church picnics. Let her go on Dancing with the Stars. But don’t under any circumstances patronize her contempt for the practice of journalism. Don’t be played for suckers. Don’t be seduced by the short-term attention rush you get from recounting Sarah’s latest online insipidness. That’s not reporting. That’s just repeating. And the public deserves more than that from the press.

Palin’s tweets, books and fluff pieces on Fox do nothing to contribute to the public’s understanding of her or her positions. If she persists in ignoring the media, then the media must ignore her back. When she wants to behave like an adult public figure and political leader who will address the issues of the day, then the press can pay her some attention. Until then, who cares? Twitter is not proxy for honest, informative discourse. Facebook doesn’t replace old fashioned newsgathering. If Palin won’t or can’t interact with news people, then she isn’t news. Walk away. Don’t look back. You’re not missing anything.

23 thoughts on “Sarah Palin: Pitiful, Sniveling, Coward Of The Year”