A new CNN poll was released that asked a frivolous little question that has no real bearing on anything. They asked who respondents would vote for in a hypothetical rematch between President Obama and Mitt Romney. However, the coverage of this poll by Fox Nation not only ignores the broader context of the data, it leaves out some fairly significant facts. 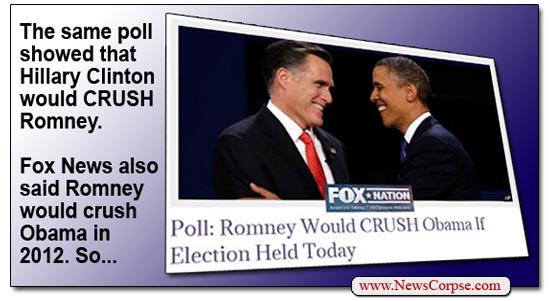 For more documented examples of Fox lies…
Get Fox Nation vs. Reality. Available now at Amazon.

These sort of polls are merely fanciful diversions that have no real world insight or impact. There are several reasons why the results are useless for anything other than political posturing, but perfect for Fox News propagandists. First of all, this poll is only a reflection of the public’s satisfaction with the current state of the nation. It doesn’t really measure any actual campaign contest, nor does it measure Romney’s popularity. In fact, it tracks perfectly with Obama’s job approval rating in most other recent polls.

Secondly, the results of this poll are constrained by the fact that only Obama has a record for which an opinion can be formed. Since Romney lost the election in 2012, he has no record on which the public can make a judgment. If he had won two years ago he would very likely be suffering from the same dissatisfaction with current affairs and, more likely, would fare even worse since his policies would have exacerbated the problems begun by his predecessor, George W. Bush.

Thirdly, the spectacle of Fox News gleefully reporting a Romney victory over Obama is nothing less than hysterical. After all, Fox insisted right up until election day 2012 that Romney was ahead in the polls then. In a fit of poll trutherism, they declared that all other polls were skewed and that Romney was headed for a landslide victory. They even failed to report their own polls when Obama was shown to be leading. On election night, Fox pundit Karl Rove threw a hissy fit, refusing to accept the network calling Ohio, and thus the election, for Obama. Apparently they still can’t accept it.

Finally, the Fox Nationalists plastered a decidedly biased headline on the article that ignores far more relevant data from the same poll. In a hypothetical contest between Romney and Hillary Clinton, Clinton would beat him by an even bigger margin in double digits (55-42). While all polling of this type is speculative, this has more merit in that it represents a real possibility in 2016. While no candidates have confirmed that they are running at this point, we know for certain that Obama will not be one of them. Fox is clearly fixated on the past and is oblivious to the future.

This is a perfect example of how Fox keeps their audience mired in ignorance. They feed them irrelevant information, witthold information that has actual value, and diverts their attention from realistic futures to a past that Fox can alter, dressing it up to look prettier to forlorn conservatives. Hopefully they will keep this up through election day 2014 and 2016.

2 thoughts on “Fox Nation vs. Reality: Romney Would CRUSH Obama If Fantasy Ruled The World”