As one of Fox News’ favorite contributors J. Christ said: “Physician, heal thyself.” That would be good advice for Dr. Frank Luntz, who has dubbed himself “The Word Doctor” for his efforts to deceitfully manipulate language in order to peddle otherwise unpopular conservative policies. 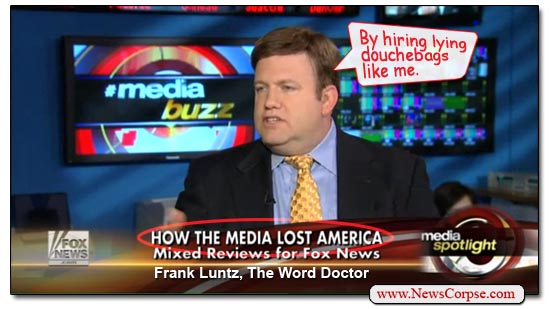 On Sunday’s episode of MediaBuzz, the Fox News media analysis program, host Howard Kurtz brought Luntz in to discuss the public’s low opinion of the media. The segment turned into a slobbering love fest of Fox News with Luntz heaping praise on the network with almost every answer. However, in one instance he may have provided a little too much information.

Kurtz and Luntz were attempting to demonstrate how “fair and balanced” the notoriously conservative network is with a clip from one of Luntz’s focus groups. Luntz began by asking the group if they trust Fox News. A distinct majority raised their hands to indicate that they did. One of the few dissenters who was asked to elaborate was a woman who said that “I really believe – I know no one wants to hear this, especially here – that Fox is an extension of the Republican Party.” Seizing on that candid opinion, Luntz heralded Fox for being “willing to challenge itself,” and took a swipe at MSNBC, who he said would not have allowed the question. Then he escalated his gushing adulation to say that…

“In 2008, when I did focus groups with Obama and McCain, all three of my sessions during the debates had Obama winning. And Fox still devoted six, seven, eight minutes to those focus groups. They have nothing to fear, and I appreciate that about this network.”

Imagine that. A Republican pollster holds focus groups that favor Obama but Fox aired the results anyway. That’s an open admission that Fox is exactly what the woman in the group said: “an extension of the Republican Party.” Otherwise, why would Luntz regard it as so extraordinary that it deserved special recognition? Luntz was praising Fox for broadcasting the segment even though it was contrary to their Republican political leanings. And of course they have nothing to fear when the other 99.9% of their programming is solid GOP talking points straight from RNC press releases.

But Luntz shouldn’t get so excited about this anomaly. Fox’s version of fairness and balance is anything but. Their oversampling of right-wing pundits and politicians has been well documented. They even provide a platform for Republican candidates to campaign while still employed by Fox as paid contributors. And just last week Bill O’Reilly did a segment that attempted to prove that Fox was ideologically evenhanded, but it backfired badly. His guest, Fox host Heather Nauert, noted that there were nineteen “liberals” on Fox “out of quite a lot” of conservatives, Nauert fumbled.

Elsewhere in the MediaBuzz segment Kurtz posed this question to Luntz: “You are saying that the audience has gotten more partisan […] Aren’t people like you in part responsible for that?” Good question, Howie. Here is Luntz’s ludicrous response which Kurtz left unchallanged:

“Well, it’s a simple question. Is the death tax an accurate description of being taxed when you die? Isn’t exploring for energy what oil companies do? Is it opportunity in education, in terms of vouchers or school choice? If you believe that the words that I’m using aren’t accurate, then you’ve got a legitimate point. I believe that these are accurate descriptions, which is why the American people seem to support it.”

Quite clearly these are not accurate descriptions. They are deliberate deceptions that Luntz carefully tested to assure that they would elicit predetermined reactions from voters. The “Death Tax” that Luntz coined is not a tax on dying. It is tax on property that is being transferred from one party to another, which is exactly what would happen if it were being done between two living persons. His “exploring for energy” dodge is meant to disguise the fact that it refers to environmentally risky off-shore drilling that the public opposes. As for “opportunity in education,” that is so vague as to be meaningless, and it dispenses with the truly descriptive phrasing of vouchers, which is what the program is all about.

Luntz is a professional deception specialist. Republicans rely on him for ways to package unpopular GOP policies so that citizens are persuaded to vote against their own best interests. In other words, he constructs lies that he sells to desperate right-wing politicos, and he supports a luxurious lifestyle by doing so.