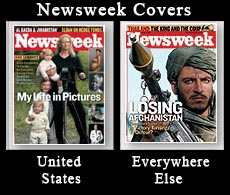 The segregation of Americans from the rest of the world is graphically illustrated with this week’s issue of Newsweek. International readers of the magazine will see a cover that features a menacing jihadi and the headline: Losing Afghanistan. But U.S. readers will get a far more comforting cover featuring celebrity photographer Annie Liebowitz and her, “Life In Pictures.” (Liebowitz cover is at the top left at the link above. Scroll down for the International cover).

Since we know that magazine covers have a profound impact on sales, the message delivered by Newsweek’s editorial staff reveals their rather disturbing preconceptions about their readers.

Whether or not the Newsweek editors are correct, they are irresponsible. Their job is to publish news, not pacify the perceived tender sensitivities of their customers. The American people deserve better than the insulting insinuation that they are too fragile to be exposed to the messy reality of truthful reporting.

But coddling like this has even more serious consequences. The gap between how the world perceives international affairs and how Americans do, is an ever-widening chasm. Americans are frequently surprised by the actions and opinions of other nations and fail to grasp why they so often disagree with us. Maybe it’s because our media does us the disservice of sanitizing our news. Like children at the dinner table, they slice it up and feed it to us in digestible bits. The result is that we don’t get the full story.

As a democracy, our foreign policy is executed by representatives that we elect. If our choices are made on the basis of incomplete, and even inaccurate, information, then our policies will reflect that deficiency. That’s why so many Americans initially supported the Iraq invasion while most of the world opposed it. That’s why universal healthcare is provided by most economically stable nations but not here. That’s why over 160 countries have signed the Kyoto environmental accords, but not the U.S. That’s why the death penalty is outlawed in every western industrialized nation except for ours.

The impression that America is out of touch with the rest of the world is inescapable and the blame lies with Newsweek and it’s peers in the American media. This cover controversy is not an isolated example. It is merely a graphically expository one. And if we do not demand more from our media, we will continue to be shortchanged and misinformed. And we will continue to misunderstand the world and they will misunderstand us. That is a dangerous brew that foreshadows escalating differences and risks for Americans and all the world’s people.

(Hat tip to Truthout and Eat The Press)