Trying to listen to radio screecher Mark Levin is a worse form of torture than anything Dick Cheney has yet devised. If you can manage to tolerate his soprano yowling, you will be nauseated by his hate-filled rhetoric. And his latest adventure in public embarrassment lives down to his reputation. 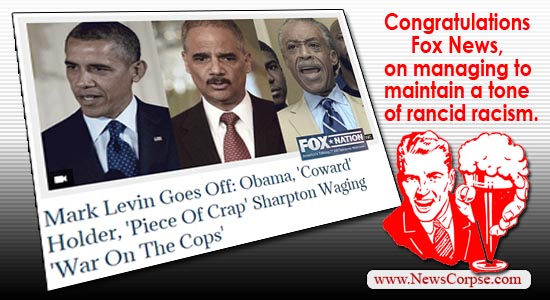 The radio broadcast that was featured on the Fox News community website, Fox Nation, set out to prove that Obama, and his legion of dark-skinned anti-Americans, were engaged in a full scale “War on Cops” as a response to the tragic and needless deaths of Michael Brown and Eric Garner.

Levin ignored entirely the suffering families of the citizens who died at the hands of over-zealous officers, while he advanced his mission to justify any and all brutality by the police. At the same time he rudely insulted those who fight for reforms that can improve community relations with law enforcement. His acid-tongue was dripping with animosity as he blasted his targets, who all just happen to be black. Here is just a taste of the tirade:

“My blood has been boiling, I’ve been grinding my teeth, listening to all this. […] the president of the United States and the attorney general of the United States, that piece of crap Sharpton […] Obama and Holder and their surrogates were throwing fuel on the fire. […] It’s a war on the cops. They want to nationalize local police departments. Nationalize them to ruin them! […] All of a sudden, all the police departments who are overly militarized, why? Has somebody been shot with a tank?

Levin is clearly in need of in-patient anger management counseling and an immediate infusion of intravenous Xanax. President Obama has been profoundly vocal in his support for the majority of decent police officers, and in his grief over the recent murders in New York. The same is true of Eric Holder and Al Sharpton. They have all called for peaceful demonstrations and expressed their sympathy for those whose lives were lost.

However, the worst part of Levin’s raving is not his dishonest assertions regarding a war on cops or his unfounded allegations of a nationalized police force. The most revolting things he said revealed his longing for an unrestricted police state where officers patrol neighborhoods in tanks and riot gear. He actually defends the notion of militarized policing. So in his haste to condemn an imaginary war on cops, he confesses that he is cool with a war on private citizens.

This advocacy of turning the nation’s populace into a contingent of enemy combatants is not only a vulgar denunciation of our constitutional democracy, it is brazenly hypocritical. Not so long ago Levin was extolling the virtues of battling officers of the law when they tried to bring Tea Party tax cheat Cliven Bundy to justice. Levin was supportive of their armed resistance which eventually led to the murder of two police officers in Las Vegas by Bundy associates. Where was Levin’s outrage and empathy for those officers?

Apparently, for Mark Levin and Fox News, killing cops is no longer considered a travesty if the killers are a white couple from the Indiana chapter of the Tea Party.