The second season of Sarah Palin’s Amazing America (the Sportsman Channel series that no one knows exists) is premiering Thursday, and Palin is pumping out promos for it. Among them, she appeared on Inside Edition (video below) where host Deborah Norville asked her about the fabricated and idiotic controversy over whether President Obama should append an “Islamic” prefix every time he refers to terrorists. [He shouldn’t and here’s why] 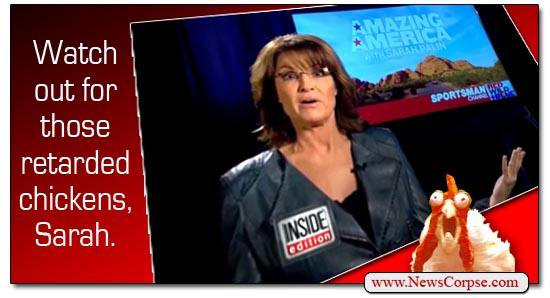 Palin’s response was a jumble of her trademarked word salad in which she resorted to calling the President names because she doesn’t think he calls people names enough.

Palin: “It is, in a sense, being a chicken, as was made manifest when we didn’t have a high-ranking official go over and unify with other world leaders to say, ‘No, this Islamic fundamentalism that is resulting in such terror across the globe, we’re not gonna have that in our land.”

Just to be clear, Palin is calling the man who ordered the attack that killed Osama Bin Laden a chicken. She is demeaning the resolve of a leader who is responsible for the deaths of hundreds of terrorist operatives, including many of their leaders. In Palin’s view, attaching a word to a description of a terrorist is a more courageous act than flying drones over their compounds and dropping bombs on them. And she actually thinks that it would have been a significant gesture to fly to Paris to participate in a staged photo-op with a bunch of political luminaries that she actually despises (i.e. Palestinian leader Mahmoud Abbas, the socialist president of France François Hollande, and Russian Foreign Minister Sergey Lavrov).

This might be viewed as the sort of mentality that reveres rhetoric over resolute action, except that that doesn’t really explain Palin’s remarks. A more accurate explanation would be that she is simply looking for any excuse to demean the President and insult America’s leadership.

Palin, on the other hand is a paragon of courage. As the mother of a child with Down’s Syndrome, she has spoken out boldly against those who use language that disparages people with disabilities. She has castigated those who use the word “retard” as a generalized insult. Palin called out Rahm Emanuel for using the term saying that it was “indecent” and “unacceptable.” She also lashed out at Bill Maher via Twitter for what she called “hatefully mock[ing]” of special needs kids.

Which is funny because Ted Nugent just did the same thing, referring to people in the media as “retards” who “screw farm animals.” But Palin is welcoming him as a featured guest on her program in a couple of weeks. That’s just how brave and committed to principle she is.