Who would ever have thought that a potential candidate for the Republican Party’s nomination for President of the United States would ever seriously challenge Sarah Palin’s epic idiocy? After all, the woman who couldn’t name a magazine that she reads and thinks that Africa is a country ought to have a lock on the contest for dumbfuckery. 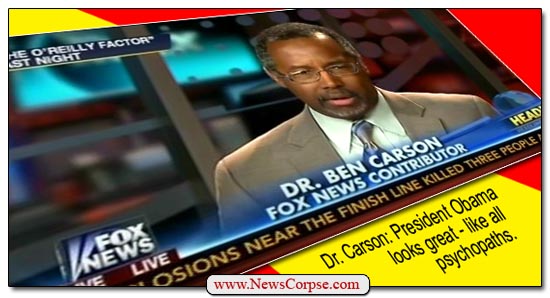 Enter former neurosurgeon Ben Carson. Apparently the medical degree and years of laudatory practice have not proved to be obstacles to asinine blathering. In an interview with GQ Magazine, Carson demonstrated his aptitude for derangement by referring to President Obama as a psychopath because he looks great “like most psychopaths. That’s why they’re successful. That’s the way they look. They all look great.” You have to wonder if that’s his medical diagnosis or if he’s just riffing ala Glenn Beck.

However, as stupid as that was, it was not what earned him the honor of toppling Sarah Palin from her pinhead perch. No, Carson had to exceed his previous efforts that included saying that America is “very much like Nazi Germany” and advocating dumping the Geneva Conventions. So he dug deep and came up with this response to an Israeli tour guide’s impromptu lesson on Israeli politics:

“And what is the role of the Knesset?” he interjected. This prompted a tutorial on Israel’s legislature. Carson is a tall, dignified-looking man with a placid, almost sleepy face. As he tried to concentrate on his Hebrew Schoolhouse Rock primer, he seemed even more fatigued. “It sounds complex,” he finally said. “Why don’t they just adopt the system we have?”

Brilliant! Why indeed? In fact, why hasn’t every nation abandoned their government processes and implemented the only ones that Dr. Carson can at least pretend to understand? After all, Israel’s parliamentary system is very much like other democracies around the world that have existed far longer than ours. So obviously it is too complex to be comprehended by a mere brain surgeon. As opposed to America’s simplistic bicameral republic that even the Supreme Court has wrestled with for a couple of centuries.

Carson’s painfully naive request that Israel scrap their government and replace it with another shows just how pitifully unqualified he is to hold any public office that might require him to make diplomatic decisions. If he thinks that parliamentary democracy is complex, imagine how much communism would confuse him. Would his foreign policy initiatives for Russia and China be that they just adopt the system we have?

While it is disturbing that an adult seeking to be elected to the highest office in the land has such an ignorant grasp of the world, it is downright depressing that there are so many Americans who regard him as qualified to hold that office. What has happened to the Republican Party that was once the home of Abraham Lincoln and Dwight Eisenhower?