Just last week James O’Keefe was revealed to have plotted an elaborated scheme to incite violence against police officers and blame it on peaceful protesters. His associate in the affair withdrew on moral grounds, so O’Keefe fired him. Now he is subject to a possible wrongful termination lawsuit and the flurry of bad publicity that results from orchestrating a despicable act of provocation that might have gotten someone killed. 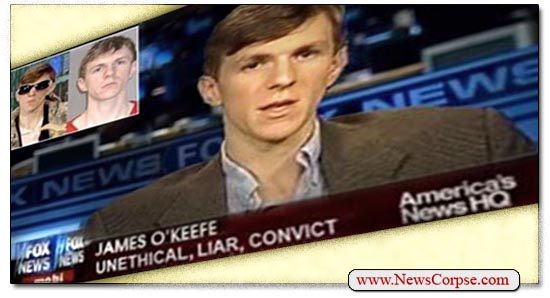 On the heels of that embarrassment, O’Keefe has rushed out another of his video atrocities wherein he attempts to defame unsuspecting victims by deceiving them and later editing the video to misrepresent what actually occurred. Perhaps he is hoping to shift attention from the ethical failings currently burying him.

In this episode (video below) O’Keefe sent his flunky to Cornell University to pretend to be a prospective student with questions about campus activities. The premise in this charade is that the flunky supposedly got Joseph Scaffido, an Assistant Dean of Student Activities, to agree that visits by Middle East terrorists and care packages to be sent to ISIS would be acceptable to the school administration. However, as with all of O’Keefe’s deceitful projects, what he delivers is hardly credible evidence of anything untoward.

The first notable contradiction in the video is that O’Keefe repeatedly claims that the flunky was inquiring about starting a “pro-ISIS” club at Cornell, however, at no time did the flunky ever say the word “ISIS.” He would refer only to helping Islamic state freedom fighters. If the Assistant Dean did not pay close attention it would be easy to presume that the phony student was merely interested in helping people who are victims of a tragic civil war.

What’s more, the flunky never said the word “terrorist,” instead referring only to freedom fighters. Since the days of Ronald Reagan that phrase has been interpreted to mean heroic citizens seeking to overthrow a tyrannical dictator. So once again, if that was Scaffido’s understanding, his response would not be the least bit controversial.

The controversy enters with O’Keefe’s narration that inserts the words “ISIS” and “terrorist” in place of what was actually said. Then O’Keefe slanders Scaffido by concluding that he is pro-ISIS and that Cornell welcomes terrorists to its campus. This overt dishonesty occurs from the opening seconds of the video and continues throughout. For example, here are the questions that O’Keefe claims were asked, followed by Scaffido’s answers and then the actual questions in parentheses:

O’Keefe: What if you wanted to start a pro-ISIS club at an American Ivy League university?
Scaffido: There are a lot of our student organizations that do things like that.
[Actual question: I think it would be important to maybe just probably educate, but to maybe send [distressed communities humanitarian] care packages whether it be food, water, electronics.]

O’Keefe: Would the Assistant Dean of Students have a problem with the humanitarian clubs sending care packages to terrorists?
Scaffido: That’s a good question that. And I think programs like that really do have a good place here at Cornell.
[Actual question: Maybe we could bring a freedom fighter to speak. That would be possible? That would be great. Just to hear the situation, what it’s like their lives and why they are fighting. I mean, do we know why they’re fighting?]

Scaffido may at worst be guilty of being somewhat inattentive because he was not expecting an impostor to visit him with intent to commit journalistic fraud. What he conveyed in his responses was a healthy respect for academic freedom and tolerance for diversity. Those are qualities that O’Keefe and his rightist cohorts detest. Already this lame video has been promoted by conservative news outlets like Hot Air, The Daily Caller, and of course, Fox News.

It is highly unlikely that Scaffido was opening the doors of the school to terrorists. O’Keefe surely knows that, but he is more interested in spreading his lies than producing anything that resembles real journalism. The notion that Cornell is recruiting terrorist students and speakers is so utterly idiotic that you have to question the mental status of anyone who would believe it.

The sad consequence of this is that everybody must be on their guard for ridiculous stunts like this lest they be dragged in and smeared by unscrupulous jerkwads like O’Keefe. And the fact that O’Keefe is too stupid to avoid exposing his own deceit doesn’t make his despicable antics any more palatable.

“Project Veritas, the organization behind this shoddy piece of “journalism” has been repeatedly vilified for dishonest, deceitful activity.”

UPDATE II: O’Keefe put another video attempting to smear a Catholic college in Florida as pro-ISIS. It suffers from the same flaws as the Cornell video. And now O’Keefe has even been smacked down by the conservative Weekly Standard for his smarmy antics.