The least humble network in cable news is whining (again) about not getting credit for something that they think they got right. It’s a rather embarrassing display of pretentious Narcissism that plays perfectly into the hands of the Daily Show’s Jon Stewart. 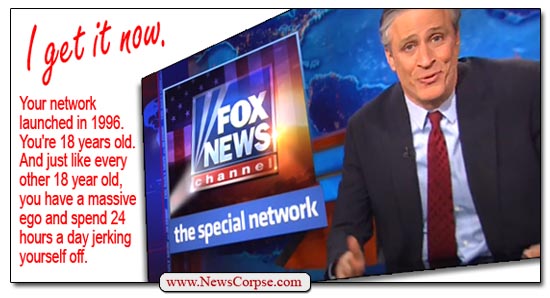 Sparking the smackdown was Fox’s Megyn Kelly, who insisted that she, Sean Hannity, and others at Fox had correctly refused to accept the rallying cry of protesters in Ferguson, Missouri, “Hands up. Don’t Shoot.” Her immodest appeal for applause came after a Department of Justice report finding that there was not sufficient evidence to charge Officer Darren Wilson with violating the civil rights of Michael Brown, the unarmed teenager Wilson fatally shot.

This set Stewart off on a hilarious rant (video below) about how Fox is constantly exalting themselves. He conceded Kelly’s argument that she was unjustly denied the acclaim she deserves for the three times in ten years that she was allegedly right. He further points out that, like a solar eclipse, “You can’t look directly at Fox. It will indelibly burn your soul.”

However, most of Stewart’s wit was aimed at how taken Fox News is with itself. There is an hysterical montage of Foxies congratulating themselves and even thanking God that they exist. Stewart observes that this magnitude of self love is aptly analogous to Fox’s relative immaturity.

“I get it now. You’re network launched in 1996. You’re 18 years old. And just like every other 18 year old, you have a massive ego and spend 24 hours a day jerking yourself off.”

While Stewart was typically brilliant comedically, he was overly generous in acquiescing to Kelly’s demand to be praised for the accuracy of her journalism. In fact, the DOJ report also found that the Ferguson police department had engaged in a “pattern and practice” of racism for many years. It was that conduct that produced the sort of suffering and grievances that the citizens of Ferguson were protesting. It went far beyond the sloganeering that Fox was so anxious to focus on. And Fox virtually ignored the part of the DOJ report that exposed the systemic racism in Ferguson.

So Kelly was not right and deserved no recognition for anything but her repeated misrepresentations. Nevertheless, Stewart once again created an entertaining and enlightening segment that sadly reminds us that he will not be doing it for much longer. So enjoy it now, while you can.