For the faithful, God is not just omnipresent, his visage is manifest in all things no matter how trivial. It is that devotion to holy encounters that has resulted in believers finding the Almighty in everything from toast to tacos.

The knowledge that the Lord is present everywhere and in everything must be comforting to those who require the assurance that their heavenly master is always watching over them. However, there ought to be limits to the imagination of these disciples. Not every vague profile of a man with a beard, visible when squinting at an old brick, is a manifestation of Jesus. Likewise, not every perpendicular arrangement of french fries or the twisted wreckage of a demolished building represents the cross of the crucifixion.

That is, unless you are a five year old child, a glassy-eyed devotee, or a Fox News host. 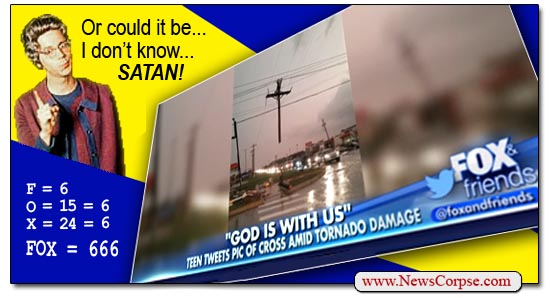 The picture above was featured on Friday morning’s broadcast of Fox & Friends. It was taken by a teenager in Moore, Oklahoma, who spotted the miracle following a devastating tornado. The Curvy Couch Potatoes at Fox then posted it to their Facebook page and reported that it went viral. They viewed it as a sign of hope following a catastrophic natural disaster that proved that, in spite of the tragedy, “God is with us.”

For some reason, when people of faith find insignificant trivialities like this they manage to assign some positive spiritual meaning to it. Something as common and trifling as a telephone pole becomes an unmistakable symbol of God’s benevolence and protection. You have to wonder why they never seem to associate the negative occurrence (e.g. a tornado) with the Lord’s work, even though there were hundreds of cross-like telephone poles throughout the city that was just flattened, presumably with God’s knowledge. Apparently, in their view, God had nothing to do with the tornado. but he hoisted a broken telephone pole up so that his children could see he was keeping them safe. At least the ones that didn’t get killed or had their homes destroyed.

The only reasonable message that can be derived from this photo is that local communications are going to be interrupted for some period of time. Maybe it’s God telling you to use your cell phone or the Internet to let your loved ones know you’re OK.

Or worse, maybe it’s a message from Satan. Maybe the Devil is taunting the victims of the tornado by showing them that their Savior is powerless to help them. How else would you interpret a broken cross dangling in the air with no foundation? And maybe Satan is using his minions at Fox to spread this fearsome message. Did you ever notice the numerical significance of “FOX?”

That’s right. FOX = 666. The self-described “most powerful name in news” is literally branded with the mark of the beast. Is that where they derive their power? If you’re looking for spiritual messages, you better consider the source. In truth, people determined to find hidden meanings (I’m looking at you, Glenn Beck) can find pretty much anything they want with a little imagination. Following 9/11, Christian zealots were certain they found a cross in the rubble of the World Trade Center. Never mind that every structural component of the tower’s architecture was in the form of a cross. It would have been a miracle if there weren’t any cross-shaped pieces of debris. Yet with literally millions of embedded crosses, the towers still came down snuffing out some 3,000 lives.

But don’t try to convince these cultists that the signs they see all around them are anything but signs of hope. After all, if they can see Jesus in the ass of a dog, they are not about to have their faith shaken by the likes of you and your “reason.” Especially when they have Fox “News” devoting its airtime to stories that pay tribute to preposterous figments of the imagination.

Fox has indeed completed the transformation to full fledged televangelism. In addition to nonsense like the telephone pole miracle, they openly advocate on behalf of Christians, whom they believe are an oppressed majority. They characterize blatantly bigoted legislation, like that just passed in Indiana, as religious liberty. They promote prayer in school and the use of the Bible as the basis for law, in violation of the constitutional separation of church and state. And they engage in the annual idiocy of their imaginary War on Christmas.

The editorial policy at Fox is stridently pro-Christian to the detriment of any other faith or the absence of it. They have a roster of openly pious Christian activists like Todd Starnes and Kelly Wright. So don’t be too surprised when Pat Robertson signs on to host his own primetime hour of worship, or Jesus & Friends premiers on Sunday morning with Fox’s resident pastor (and GOP presidential hopeful) Mike Huckabee.