“Fool me once, shame on – shame on you. Fool me – you can’t get fooled again.” Or so Jeb Bush would like you to think as he officially throws his hat into the clown car for the 2016 GOP presidential primary. This would make the third time getting fooled if anyone falls for it.

Jeb (as he will be known from now on, having dropped “Bush” from his logo), gave a typically Republican speech chock full of animus for liberals and promising to right the alleged wrongs thrust on the nation by the current occupant of the White House. For some reason, Jeb neglected to mention that President Obama restored a nation that was in a deep recession caused by brother George and his two wars and tax cuts for the rich. In fact, Jeb was so determined to leave his brother to the ash heap of history that he never even mentioned him by name in the speech.

Also unsaid by Jeb was any reference to ISIS (or Al Qaeda or terrorism). Ordinarily that wouldn’t mean a damn thing, except that that sort of omission is always used as evidence of weakness when a Democrat does it. Just this week Fox News skewered Hillary Clinton when her speech mentioned ISIS only once. Which was once more than Jeb. What are the odds Fox News will notice that?

Jeb has already revealed that his first post-announcement interview will be with Sean Hannity of Fox News. So he will be following in the footsteps of Rand Paul, Ted Cruz, Marco Rubio, and Rick Perry, who all lost their interview-ginity to Hannity as well. This is a Republican christening of sorts, and one sanctioned by the party, whose chief spokesman, Sean Spicer, said “I think if you didn’t go to Hannity you would be sued for political malpractice.” So according to the Republican Party it is malpractice not to kiss Hannity’s ring. That’s a pretty good confirmation that the Republican Party doesn’t really exist anymore with Fox News taking over their messaging and the Koch brothers taking over their electoral operations.

And if that isn’t proof enough, RNC Chairman Reince Priebus (whose name without the vowels is RNC PR BS) was recently interviewed by conservative radio talker and Fox News contributor Laura Ingraham and told her that “Republicans don’t exist as a national political party if we do not win in 2016.” 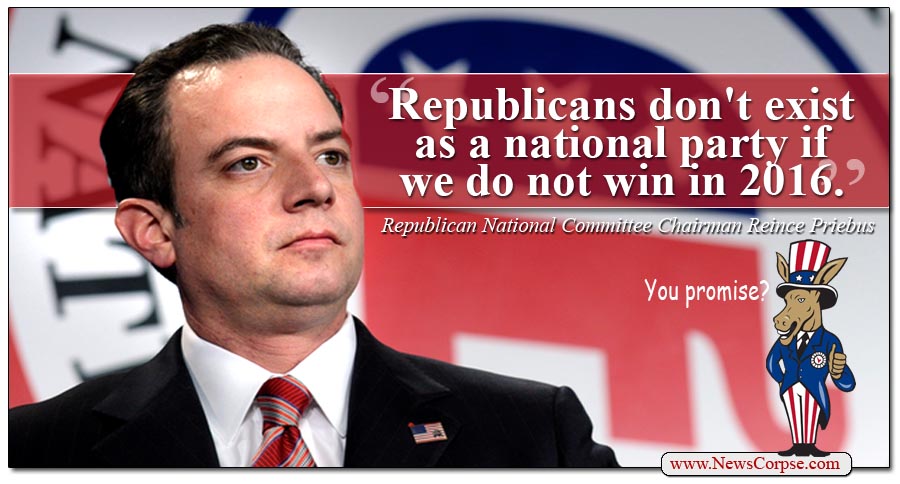 Still not convinced? Back in 2012, Rush Limbaugh told his audience of proud dittoheads that “If Obama wins let me tell you what it’s the end of … the Republican Party.” So the party’s demise is already three years overdue by Limbaugh’s calculation. Of course, Limbaugh’s track record for accuracy is dismal. There’s a much better gauge coming up tomorrow. That’s when Donald Trump is scheduled to make a “major announcement” concerning his presidential ambitions. I still stand by my prediction that there is no way he will run. But if he does, then all of the predictions about the end of Republican Party will be immediately fulfilled.