Poor Jesus. After going to all the trouble of throwing the Money Lenders out of the temple, now he has to deal with cretins like Rush Limbaugh who think that the church founded in his name is beholden to secular profiteers and godless corporations. 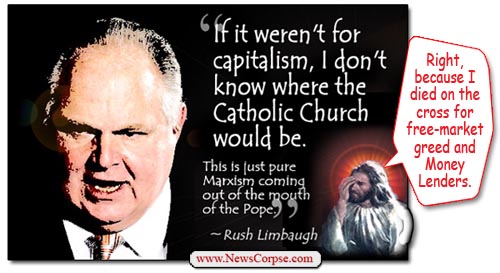 How else could Limbaugh explain his opinion that the Catholic church would be lost “If it weren’t for capitalism?” It is astonishing that the people who most aggressively impose their religious beliefs on others, who demand that the whole of society celebrate their holidays and insist that their values be codified into law and school curriculum, these people seem to have the shallowest grasp of the faith they profess. And Limbaugh is not alone in his Adoration of Greed. A few years ago Bill O’Reilly said on his Fox News program that…

O’Reilly actually believes that this country should be grateful that Jesus came along because the holiday commemorating his birth is such a boon to businesses. Now that’s the Christmas Spirit, isn’t it.

Limbaugh’s tirade was sparked by a recent paper authored by Pope Francis that articulated a version of Christianity wherein a moral society cared for the least of its citizens. He explicitly repudiated Republican values like “trickle-down economics” and preached that economic “inequality is the root of social ills.” That is the sort of talk that unhinges right-wingers whose greatest fear is to be lumped in with the unclean masses who, ironically, are the producers and consumers of the goods their businesses peddle.

All of this comports with the Christian hypocrite dogma spewed by political hacks who are only trying to exploit people who follow Christ’s teachings. These pundi-vangelists couldn’t care less about faith or service. However, the Republican Party shares something in common with the worst aspects of the Christian church. They are both trying to sell stories on faith to ill-informed people who are motivated by fear. But these religious scam artists are only concerned with their own welfare. They have no real compassion or generosity. Their tunnel-blind self-interest is a stark affirmation of the wisdom of the revered Catholic Dom Helder Camara, Archbishop of Recife, who said…

25 thoughts on “The Anti-Pope: Rush Limbaugh Pimps For The Money Lenders Lobby”