When it comes to being utterly oblivious to easily observed facts about the real world, no one is more wrapped in delusion than Bill O’Reilly of Fox News. And the wonderful thing about Billo is that he is not shy about providing evidence of that on a regular basis. 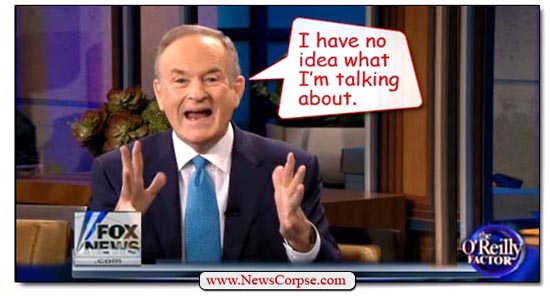 Last night O’Reilly delivered his response to President Obama’s address on gun violence (video below). It was a typically disjointed lecture that relied more on bluster than logic. Right out of the gate O’Reilly sought to establish a premise that was totally contradicted by the facts that he provided himself:

O’Reilly: According to the latest FBI stats, slightly more than 8,000 people were victims of firearm murders in 2014. There were 118,000 robberies involving a firearm. And almost 150,000 aggravated assaults involving guns. The population of the U.S.A. is approaching 330 million.

And his conclusion from all of this: “So you can see there is not a gun crime epidemic.”

Really? More than 8,000 deaths – over twice the number killed on 9/11 – does not constitute an epidemic even though it is repeated annually, not just once fourteen years ago? And there were nearly 300,000 additional crimes that involved guns, but were not fatal. But O’Reilly cavalierly dismisses these statistics – and the victims – as unworthy of recognition as a crisis. That callousness is representative of the right-wing attitude that regards the suffering of hundreds of thousands of Americans as the price we pay for the alleged “freedom” to possess any kind of weapon we desire. And to the NRA-theists it doesn’t matter if you are a felon, a domestic abuser, or even on the Terrorist Watch List. Gun nuts have even advocated for the “rights” of the blind, the mentally ill, and the dead to own guns.

For the record, Media Matters has compiled documentation showing that gun violence in American is indeed at an epidemic level. They note that the National Physicians Alliance has called it “a public health issue that has reached epidemic proportions;” the medical director of the New York State Office of Mental Health said that “the mass murders infesting our country now behave like an epidemic;” and the Surgeon General has said that it “constitutes a public health issue.”

O’Reilly went on to embarrass himself by making self-contradictory statements. In an effort to argue that background checks are a meaningless exercise that will have no effect on crime or gun violence, O’Reilly said…

The truth is terrorists are not gonna submit themselves to background checks. Neither are dangerous felons or insane people. They’re not gonna sign any paper when they buy a gun. They will buy their guns on the black market. And no registration law will prevent that.

On the other side, the NRA and gun owners should be reasonable. The FBI should background check anyone buying a firearm in America. That just makes sense.

Huh? Why does O’Reilly think it makes sense to “background check anyone buying a firearm in America” if he also thinks that all of the people the checks are intended to prevent from buying guns aren’t going to submit to one? Either he knows that background checks work, or he’s arguing for a policy that he thinks is pointless. In any case he’s being blatantly dishonest and swinging so wildly that he has abandoned all reason.

That’s the advanced state of O’Reilly’s obliviousness to reality. He simply lives in another world where whatever he imagines is made manifest in his warped mind. And that’s how he can enumerate all of the tragic statistics on gun violence and then blithely declare that there is no epidemic. It’s a classic case of “ignorance is bliss,” or more simply – plain old ignorance.

5 thoughts on “Bill O’Reilly’s War On Reality: There Is Not A Gun Crime Epidemic”