Apparently the election season gods didn’t think there was enough comedy in this year’s political news. So they are providing us with a new object of ridicule that is really just a warmed over version of an old one. 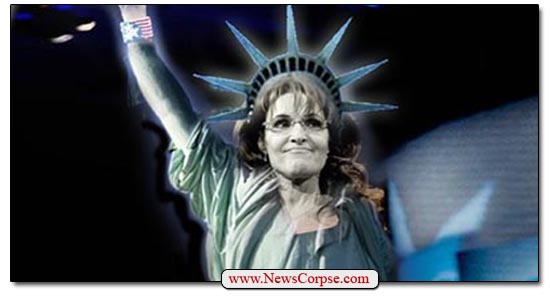 Sarah Palin has reportedly signed a deal to appear as a reality TV show judge in the mold of Judge Judy (with an emphasis on mold). At this point the show is just a proposal that has not even produced a pilot. If/when a pilot is available it will be shopped to independent television stations in the hopes of getting enough takers to make going into production financially viable. That may be a difficult task.

The potential market for a new Palin vehicle already knows that her previous forays in television have ended poorly. She was not able to keep her first series, “Sarah Palin’s Alaska” on the air. Nor was she able to draw sufficient ratings to sustain her second attempt, “Amazing America With Sarah Palin.” She also suffered a total collapse with her subscription Internet video venture that didn’t even last one year. And, of course, she was jettisoned by Fox News who couldn’t justify paying an incoherent has-been to shoot off her mouth for a few minutes a day.

Now some enterprising producer thinks he can package Palin to star in a pseudo-legal reality show. This despite the fact that Palin is neither a lawyer, nor a judge, nor adept at anything associated with mediation, or for that matter, entertainment. What a great idea.

The only reason that seems plausible for this project to exist would be to prepare Palin for a future role in the administration of Donald Trump, should America be unlucky enough for that nightmare to manifest. Trump could then nominate Palin for a seat on the Supreme Court and cite her judicial experience in the realm of syndicated TV. She would be almost as qualified as the rest of the bozos that would infest a Trump administration.

Maybe Palin thinks that as a television judge she would have special powers to achieve her own personal goals. For instance, she could rule death panels unconstitutional and strike down ObamaCare. Or she could issue subpoenas for Hillary Clinton’s top-secret Benghazi confession. Or she might just keep things close to home and pardon her son for having beaten his girlfriend and brandishing an AR-15 while drunk. The options are endless for a season of legal buffoonery. Too bad the chance of this ever getting off the ground is about equal to the chance of Palin being named the GOP nominee for president at the upcoming Republican convention. Hmm. Maybe I should give them any ideas.

5 thoughts on “Judge? Not! Sarah Palin Announces Her Next Pathetic Media Failure”