The latest round of Republican primaries has returned the results that pretty much everyone expected. Donald Trump prevailed in the northeast corridor over his hapless GOP rivals who are only competing to challenge Trump at an open convention in July. The fact that Trump continues to pull out victories like this is evidence of how low the Republican Party has sunk into blind obedience to the overlord of reality TV celebrity worship. It’s behavior that they have learned faithfully from being loyal devotees of Fox News for so many years. 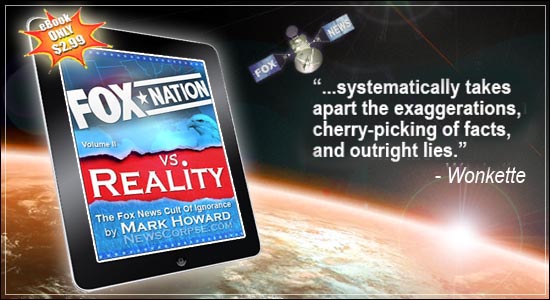 Trump’s disciples don’t care that he is a flagrant racist who has demonstrated his prejudice against African-Americans, Latinos, Muslims, and women. They aren’t put off by his promises to commit war crimes against women and children in Syria and Iraq. They let slide that he isn’t bothered by being compared to Hitler. And no matter how much he lies they just brush it off and keep applauding like slap-happy seals (See the Trump Bullshitopedia) They even applaud when he insults them as mindless baboons or threatens to incite riots.

It is that sort of unquestioning devotion that forms the foundation of every successful cult. And those components were built into Fox News from its inception. In an effort to document this phenomenon, News Corpse published a collection of articles that highlighted the deception, propaganda, and outright lies disseminated by the Fox News community website, Fox Nation. The second volume of this series was dubbed “Fox Nation vs. Reality: The Fox News Cult Of Ignorance.” Every chapter is fully verified by reputable sources and exposes the website for its shameful dishonesty and lack of ethics. It reveals the concerted effort by wealthy and powerful media fabulists that is aimed at crippling the intelligence of the willfully dimwitted. It is a great resource for proving to your Fox-deluded friends and family what a den of deceit it is. Here is an excerpt from the introduction:

“Since then Fox Nation has evolved into an even more sheltered environment that has taken on many characteristics of culthood. It is a pattern they adopted from their parent, Fox News, where the slogan “fair and balanced” was an implicit condemnation of all other news sources as being neither. Recognizing that the prime directive of a cult is to convince your followers that your version of reality is the only true version and that all others are agents of deception, Fox segregated their disciples to prevent them from being contaminated by impure thoughts, otherwise known as facts.”

Stay to to News Corpse for more insights into the media and its incestuous intersection with politics. Be sure to like us on Facebook. And here is where you can get your copy of Fox Nation vs. Reality: