One of the most enduring and annoying characteristics of the Fox News personality is that they are quick to take offense at any criticism and express their inner pain whenever they feel the least bit insulted. They have a defense mechanism that is on a hair trigger. If you have a legitimate complaint about the network you can expect them to fire back with ferocity. 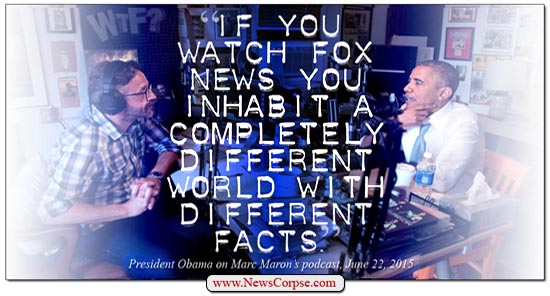 When Jon Stewart was on The Daily Show, Fox News regularly went into hysterics over his comic swipes at them. Never mind that his barbs were often aimed at Democrats and liberals as well, the ones targeting Fox brought out their full armory of wrath. And if President Obama dares to make a perfectly reasonable observation that Fox News has been biased against him, Fox reacts as if they were pierced with a presidential harpoon. They cry like babies every time Obama knocks them, even if it’s just in passing and in concert with a knock on the left.

However, they have yet to show the same indignation when their comrades on the right throw mud at the network. They seem to have a special store of umbrage that’s reserved only for Democrats who hurt their tender feelings.

For several months now Donald Trump has been wailing at Fox News for being boring, dopey, dishonest, unfair fools and clowns. He has directed his insults specifically toward featured Foxies like Bill O’Reilly, Charles Krauthammer, George Will, Karl Rove, and especially Megyn Kelly. He has sabotaged their debates by refusing to participate and has even advocated boycotting the network.

Now Ted Cruz is also slamming Fox News. In a press conference last week he complained that Fox has been unfair to him as it obsesses over Trump. He actually has a point. Fox has given Trump far more air time than any candidate of either party. And they have also given Trump more airtime than any other network has given him. Still, it generally doesn’t matter to Fox if the incoming criticism is true or not. They usually fire back with everything they’ve got.

So we now find ourselves in the odd position of seeing the top Republican candidates for president both bashing Fox News, the top media mouthpiece for Republicans. You know you have really crossed over into weird territory when right-wing politicians are the most prominent protesters of a media platform that has paved the way for their candidacies. Where will this leave Fox after the election?

What’s peculiar is that Fox has not been returning fire at the Republican candidates. With the exception of one response to Trump’s “sick obsession” with Megyn Kelly, the GOP offenders are being given a pass to hammer away at Fox. For a network that is notorious for brutal and rapid responses to critics, this can only be seen as a gift to the GOP. Liberal critics like Stewart or Bernie Sanders or Rachel Maddow had better take cover before delivering uncomplimentary comments. And President Obama should prepare for a nuclear blast. Fox is all for free speech as long as it doesn’t contain any criticism of their blatantly dishonest propaganda. Unless that criticism is coming from their ideological pals.