One of the unique characteristics of Donald Trump’s “reality TV” candidacy is his predilection for coining derogatory nicknames for his rivals. It’s a particularly childish habit that exemplifies the stunted emotional growth of a snotty elementary school bully. He has used this smarmy tactic against “Little” Marco Rubio, “Lyin'” Ted Cruz, “Crazy” Megyn Kelly, “Crooked” Hillary Clinton, and others. In most cases it can be better explained as projection of his own character flaws. 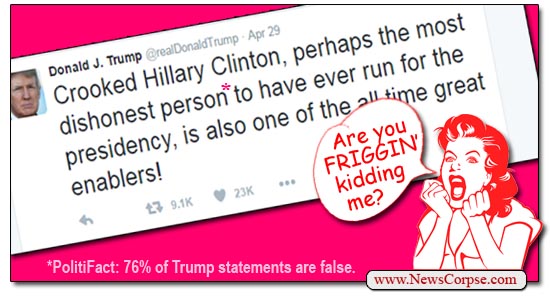 Yesterday Trump tweeted another of his petulant insults that have become the hallmark of his campaign to malign the presidency (he says he may start “acting” presidential soon). This one was directed at Hillary Clinton and said…

“Crooked Hillary Clinton, perhaps the most dishonest person to have ever run for the presidency.”

Coming from Donald Trump this is nearly hysterical. Virtually everything that comes out of his mouth is either painfully ignorant, grossly insulting, or demonstrably false. News Corpse has been collecting Trump’s voluminous anthology of untruths in the Trump Bullshitopedia, an ever-expanding catalog of his lies.

The media watchdogs at PolitiFact have also been scoring the presidential candidates. What they found is that 76% of the statements they rated by Trump were false in some degree. That includes twenty-four statements they called “Pants on Fire” lies. Only three, out of 134 of Trump’s statements, were rated as true.

Hillary Clinton’s score, on the other hand, was the mirror opposite of Trump’s. She had 71% of her statements rated as true. So the hypocrisy of Trump is not incidental. It’s delusional. Clinton, whatever her faults, is far and away more honest than Trump. But that doesn’t stop Trump from arbitrarily slandering her. In fact, it’s perfectly in character for Trump to lie about the honesty of others. 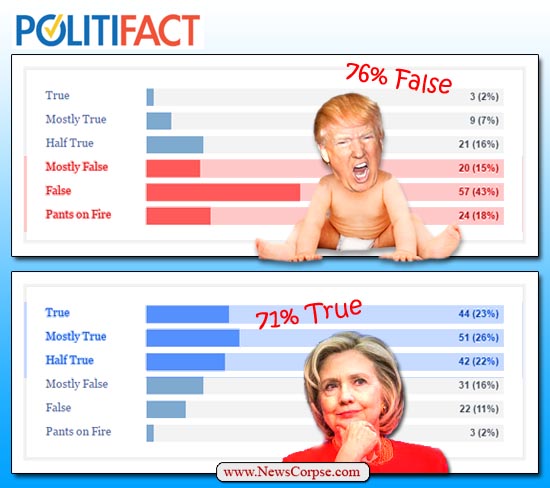 For good measure, Trump added another slight to Clinton in the same tweet saying that she is “one of the all time great enablers.” That is a thinly disguised reference he has been using to try to reignite the Bill Clinton sex scandals of the nineties. Beside that being a lame overreach into past irrelevancies, it is also a dangerous path to tread for a man who wants to bang his own daughter.