Democratic congress members of the House of Representatives launched an unprecedented protest in the chamber by staging a sit-in. The purpose of the protest is to force Speaker Paul Ryan and the Republican leadership into scheduling a vote on gun safety reforms (video here). 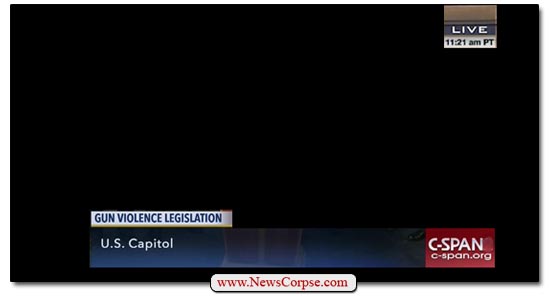 Shortly after the protest began, the Republicans who control the House called a recess saying that the House is not in order, and then shut off the chamber’s cameras to prevent the American people from seeing their representatives actually doing something worthwhile and in agreement with the majority of the people. It is a brazen act of censorship intended to make the courageous demonstration disappear and to help the GOP in their efforts to kill reform at the behest of their NRA masters.

By taking the unprecedented step of shutting off the cameras, CSPAN went dark. They later had to resort to broadcasting video from mobile phones in the chamber, which continues as of the writing of this article. And as if that weren’t bad enough, Rep. John Yarmouth just tweeted that “The Sgt at Arms is asking us to stop taking photos and video from House floor. Republicans should turn the cameras back on.”

These GOP authoritarian tactics are nothing less than government suppression of free speech. This is the people’s house, not the private broadcast facility of the Republican Party. And despite the GOP’s tyrannical usurpation of power, Democrats are united in persisting with this protest. Participants include party leaders like John Lewis and Nancy Pelosi, and they have promised that everyone who wants to speak will be able to.

Republicans will have to shut down the building and evacuate everyone if they hope to end this. Which I wouldn’t put past them. Two years ago the GOP held a hearing on the alleged IRS targeting of Tea Party groups. Darrell Issa, the Republican chairman of the committee, delivered a five minute opening statement, asked a few leading questions, then gaveled the hearing adjourned without allowing anyone else to speak. The ranking Democratic member, Elijah Cummings, objected to the adjournment, but Issa cut off his microphone and stomped out of the room. Cummings continued without the mic calling Issa’s conduct “absolutely un-American.”

This is pretty much what we can expect from the Republican Party if it is allowed to remain in control of Congress, or worse gain the White House with a victory by Donald Trump (who has revoked the press credentials of several media organizations and whose camp has advocated revoking the broadcast license of CNN). Democrats have to be united in voting out Republicans in every jurisdiction if the nation hopes to preserve its constitutional freedoms.