On the first day of the Republican National Convention there was plenty of drama and controversy to roil the Trump campaign. A vote on the convention rules blew up with many delegates disgusted by the Trump team’s bullying tactics. Some early speakers took harsh and negative tones that were contrary to the theme of unity and inclusion. 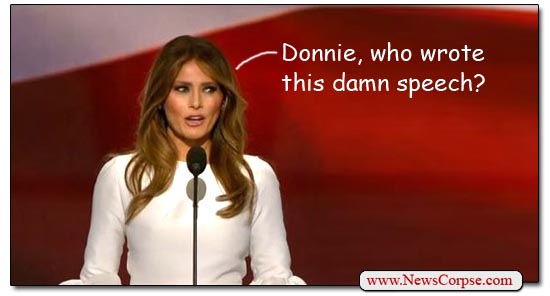 But the most striking misstep came when Donald Trump’s wife Melania delivered a speech that contained several passages that were obviously plagiarized from the speech that Michelle Obama gave at the Democratic National Convention in 2008. This rhetorical larceny was first noticed by by Jarrett Hill on Twitter. Here are some of the nearly identical phrases that appeared in both speeches:

The similarities here are too close and too numerous not to be recognized as deliberate theft. And the fact that Melania was allowed to go out on stage to deliver that speech is an indictment of the entire Trump operation. Surely she did not write the speech. But it was written by people on Trump’s staff who were trusted enough to put his wife’s fate in their hands. And it had to have been reviewed by by everyone from Trump’s communications managers to Trump himself.

This is going to be tough to explain away. And it will be an indelible stain at the worst possible time for a convention – on the opening night. It’s just downhill from here.

“In writing her beautiful speech, Melania’s team of writers took notes on her life’s inspirations, and in some instances included fragments that reflected her own thinking. Melania’s immigrant experience and love for America shone through in her speech, which made it such a success.”

It’s hard to tell what part of that statement is a response to this matter. I think it’s the part where they say that “some instances included fragments that reflected her own thinking,” in effect, blaming Melania.