After years of pretending to be fair and balanced while shilling for Republicans, Fox News has completed a frightening metamorphosis. This morning they took a giant leap into the black hole of crackpot conspiracy theory. It’s a development that illustrates the lengths they will go to promote their home-brewed presidential candidate, Donald Trump. 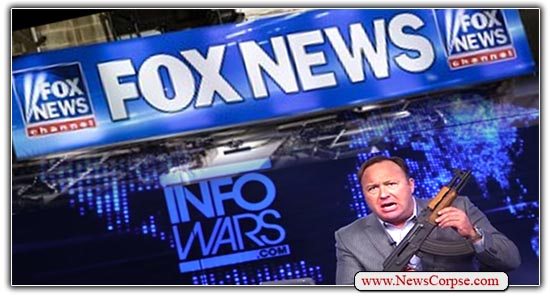 On Fox & Friends First, co-host Heather Childers introduced a segment alleging that Google is “trying to sway the presidential election.” Their evil plot consists of manipulating search results to suppress evidence of the trail of dead bodies left by Bill and Hillary Clinton. Cheryl Casone of Fox Business Network took the handoff to report that:

“Google is being accused of hiding negative stories about Hillary and her campaign by changing its algorithm to bury stories like the ‘Clinton body count’ story. That’s according to website InfoWars.”

It is also interesting to note that Fox believes there is a “Clinton body count” story to be buried. And why not? They have been reporting that Obama is a secret gay Muslim from Kenya who founded ISIS for years. So what is Fox News and InfoWars so worked up about today?

“If a Google user types in ‘Clinton body,’ they get car repair shop results instead of a story that talks about a list of people tied to the Clintons who have died under mysterious circumstances over the last three decades.”

Oh my heavens. Bring me the smellin’ salts, Margaret. Apparently Google is participating in the cabal to suppress the Clintons’ thirty year murder spree. Fox and InfoWars believe that Google’s biased search results need to be corrected. Instead of intelligently curated data, they should highlight slanderous fables from the diseased minds of right-wing hate mongers.

It’s impossible to ignore the connection to Donald Trump’s campaign. He has been a frequent guest on InfoWars. Plus, his new campaign chair (Stephen Bannon of Breitbart News) is cut from the same soiled cloth as Alex Jones. There is an unmistakable trend toward the bonehead breed of pseudo-journalism that is sprouting up around Trump and his media advocates. His stump speeches are now almost entirely read from TelePrompters pre-loaded with talk radio style bombast. These include charges that Clinton is a felon, a traitor, and is about to drop dead.

These sort of screwball ideas are not surprising from InfoWars. They are, in fact, their reason for being. But for Fox News to reach down into that cesspool of idiocy is a new low, even for Fox. What is the limit of their debasement of journalism if it isn’t aligning with InfoWars? Fox has allowed such nonsense to bubble up into their reporting in the past. But this may be the first time they have explicitly attributed their story to InfoWars. That might be more honest, but it is a bad sign nonetheless. It means they are comfortable mainstreaming the likes of Alex Jones.