There have been some historically unprecedented occurrences in this wildly turbulent presidential campaign. But through it all Fox News has maintained a consistent state of stridently partisan reporting in support of Donald Trump. Their programming relentlessly disparages Hillary Clinton and some of their most prominent hosts have explicitly endorsed Trump. 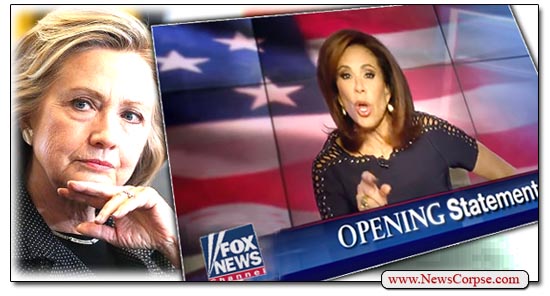 In the wake of the FBI’s shameful disclosure about their investigation of Clinton, many critics have excoriated Director James Comey for breaching the agency’s policies and ethical responsibilities. These critics have spanned across the political spectrum with most law enforcement experts united in chastising Comey. Former Justice Department officials of both parties have publicly questioned his judgment and motives.

However, no critic is more surprising than Fox’s own Jeanine Pirro. Pirro is a former judge and prosecutor with years of experience in the legal system at the local and federal levels. She is also one of Fox’s most starkly anti-Clinton commentators. Her weekly rants against Clinton have accused her of having “corrupted the State Department.” She called Clinton “a liar, and a pathological one at that.” She falsely charged that the Clinton foundation is “nothing more than a money laundering operation.” In one commentary she lashed out that “Bill and Hillary Clinton are the Bonnie and Clyde of American politics.”

It’s difficult to imagine that someone who equates Clinton to cold-blooded murderers would suddenly come to her defense. But that’s an indication of just how seriously improper Comey’s behavior has been. In this week’s commentary on her Fox program, Pirro joined those who have assailed Comey saying that his announcement coming just “eleven days before one of the most hotly contested presidential elections of our time, both disgraces and politicizes the FBI.” Making certain to reinforce her political preference, Pirro said:

“Now you know that I support Donald Trump and I want him to win, but whether it’s Hillary Clinton or anyone else, Comey’s actions violate not only long-standing Justice Department policy, the directive of the person he works under, the Attorney General, but even more important, the most fundamental rules of fairness and impartiality.”

Pirro then relates her personal experience when she was as a candidate for New York State Attorny General. The FBI opened an investigation of her at the time about which she says “the adverse publicity cost me at the polls. What was done to me in 2006 was wrong, and what happened to Hillary Clinton [Friday] was equally wrong.” Continuing, Pirro laid out the fundamental reasons for her position:

“The Justice Department and the FBI’s policy to not comment publicly about politically sensitive investigations within 60 days of an election exists for a very important reason. Announcements so close to elections have an impact. Now this nation has already gone through an exhausting and traumatic campaign season. The FBI director should not now be front and center. One of the most revered agencies in our nation’s history, now seen as putting its finger on the scales of justice.”

No one should mistake Pirro’s remarks for anything resembling support for Clinton. And in the very same commentary Pirro made that crystal clear:

“Hillary Clinton should have been indicted a long time ago. She and Bill’s scandals have done nothing but soil this great nation’s image. It’s long-past time for both of them to start paying for their wrongdoing.”

Of course, she doesn’t expand on her vague condemnation of Clinton because there aren’t actually any violations of law for which she could be indicted. Virtually every alleged “scandal” attributed to the Clintons has been repudiated and debunked as purely political smear campaigns. But it does demonstrate the ferocity of her animosity toward the once and future First Family.

Yet with all of that seething hatred, Pirro cannot ignore the disgraceful and unjust actions by the FBI director. That should be enough to convince even the most glassy-eyed, alt-right, Trump disciple that Clinton was dealt an unfair blow. It is now incumbent on Comey to repair the damage he’s done by either releasing what he has, or clarifying that there is nothing in his findings that indicate any wrongdoing on the part of Hillary Clinton.

Short of that, Comey will continue to be suspected of partisanship that may even be illegal. As Senator Harry Reid noted, he may be in violation of the Hatch Act that prohibits such partisan activity by government officials. This includes the astonishing revelation that, while Comey is doing harm to Clinton’s campaign, he is protecting Trump. Says Reid:

“It has become clear that you possess explosive information about close ties and coordination between Donald Trump, his top advisors, and the Russian government.”

Reid wonders why Comey would release damaging information about an ongoing investigation of Clinton, but lets Trump off the hook. So should we all. Clinton’s past management of her email doesn’t compare with the threat of a Trump presidency that’s aligned with the Kremlin. So why won’t Comey reveal what he knows about Trump and the Russians? It’s a blatant double standard that tarnishes his reputation and that of the agency he heads. And if Jeanine Pirro, a notoriously shrill foe of Clinton notices the hypocrisy, it must be the genuine article.